German farmers have some good news to report as International Green Week kicks off in Berlin. Exports of German agricultural produce and farm machinery reached a new peak last year despite a challenging environment. 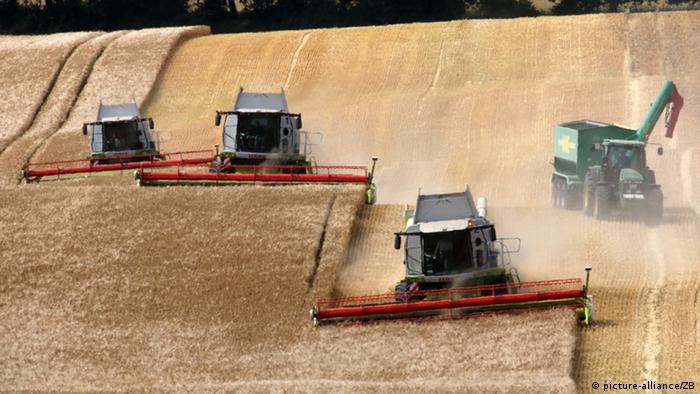 Germany's agriculture industry exported produce and farming machinery worth €78.3 billion ($95.9 billion) in 2017, the German Export Association for Food and Agriproducts (GEFA) announced Thursday on the basis of preliminary calculations.

This would mark an all-time annual high, up 3.9 percent from the previous year, the association noted in a press release on its website.

It added that Germany remained the third-largest exporter of agriproducts globally, the same going for imports.

After several years of slumping produce shipments (not counting machinery) to fellow EU nations, German exports to the 28-member bloc surged by 4.4 percent last year to €46.4 billion from January through October 2017, while exports to countries outside the EU only rose by 2.3 percent.

GEFA said it was gratifying to see that exports to Russia had also risen considerably in recent months despite a series of EU sanctions against Moscow still in place over the Kremlin's perceived role in the Ukraine conflict.

By contrast, 2017 shipments to China dropped by 11.7 percent, and those to Iran went down by a staggering 37.7 percent.

Farmers' associations warned against protectionist trends in global trade, saying that planned bilateral treaties had been taking shape only slowly.

The GEFA figures came out as International Green Week, one of the largest agriculture shows in the world, started in Berlin. Among other things, it will be focusing on new ways of sustainable farming.