Germany's newest party, the euroskeptic Alternative für Deutschland, is routinely dismissed as the German Tea Party. The AfD balks at the comparison, but its "party of reason" approach is not convincing pundits. 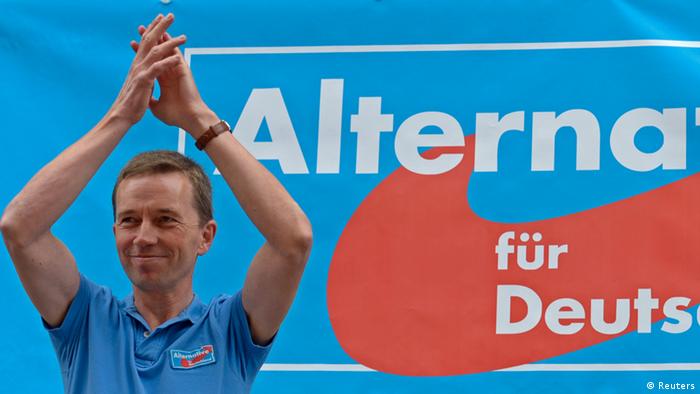 New political parties never have it easy. Just over a year old, Germany's newest political party, is hoping to win its first elected representatives at the European elections in May. The latest Infratest Dimap poll from May 14 puts the AfD's share of the vote at a respectable 7 percent, but the party is contending with all kinds of bad press.

According to the media, the "Alternative für Deutschland", routinely described as Germany's "anti-euro" party, is far-right, nationalist, paralyzed with in-fighting, bleeding membership, and unclear on what it really stands for.

The premier of the state of Saarland, Christian Democrat Annegret Kramp-Karrenbauer, even accused the AfD of being "borderline anti-constitutional" in an interview with daily Die Welt.

AfD replied by saying that this was just the kind of statement that fueled "anti-democratic elements" that had taken to dismantling and destroying AfD election billboards and attacking AfD members on the campaign trail.

When the party advertised in Germany's left-wing daily TAZ, it caused a storm of protest on the paper's social media channels. Readers questioned whether the paper should have allowed the party's ad, as it has been known to reject ads that are deemed to have racist or sexist messages. 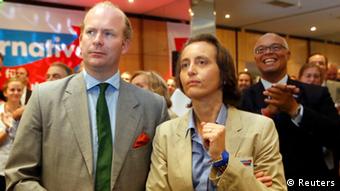 An attack in Germany's well-respected conservative newspaper the Frankfurter Allgemeine Sonntagszeitung (FAS) highlighted remarks made by Beatrix von Storch, a leading, arch-conservative candidate in the European election, about home-schooling and referendums about mosques, and claimed that "Bible-loyal Protestants" were taking over. The AfD, the paper said, was becoming "Germany's Tea Party."

That comparison has been made often enough before, especially by the English media last year, when the party was founded at the height of the euro crisis, fueled by exasperation at the bailouts Germany was shelling out to ailing economies elsewhere in Europe.

But the similarity seems superficial. While the Tea Party sells itself as an ordinary people's movement in opposition to detached elites, the AfD could itself be thought of as elite. Its media-fueled profile is generally white, male, middle class, middle-aged, and educated - two-thirds of the initial membership held doctorates, with 86 percent of these male. Nigel Farage, leader of the nationalistic UK Independence Party, once described the German upstarts as "a bit academic, but very interesting."

The party itself certainly does not take kindly to the comparison with the Tea Party, or, for that matter, with UKIP. "It doesn't fit for many different reasons," spokesman Christian Lüth told DW. "Firstly, because the Tea Party has fundamental religious roots - that's not the case with us at all. We're a party of reason. That's not mutually exclusive, but it is a very big difference." 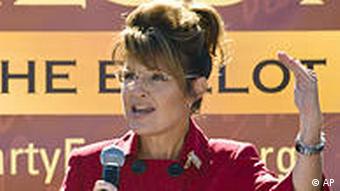 Much to the annoyance of party leader Lucke, however, who has repeatedly distanced himself from the likes of UKIP, its chairman,Nigel Farage, was invited to speak at an event organized by AfD's unofficial youth arm at the end of March in Cologne. It shows that the party struggles to find unified positions and that some of its members appear to be leaning to the right more than others.

But Simon Tilford, deputy director of the UK think tank, Center for European Reform, is still wary of the Tea party tag. "I think it's a little unfair," he told DW. "I think there are Tea Party echoes in economic policy, but I think those echoes are actually much stronger in the CSU [Bavarian sister-party to Merkel's CDU]."

"It's a one-issue party, they don't have policies across the political agenda the way the Tea Party does," said Tilford. "They've taken a stance on the euro, so some of the things they say sound similar, but I don't think it's fair to characterize them as a populist far-right party in the vein of the National Front in France or UKIP in the UK."

With so many academics in its ranks, the AfD likes to play its economic expertise as a strong suit. The AfD's founding argument is that not only is the eurozone crisis being mishandled, the single currency itself is fundamentally flawed. But confusingly, actually scrapping the euro is not in the party's manifesto. This lack of a clear banner policy on its main issue has somewhat undermined its popular appeal - a bit of a problem for a so-called populist party.

"The AfD never wanted to scrap the euro completely - there were different solutions," said Lüth. "One was to leave the euro, the other was divide up the euro to the north and south, according to the strength of different economies, the third was to return to national currencies, but that, too, didn't necessarily mean scrapping the euro, just that each country would be allowed to decide whether it wanted to leave or not."

Party leader Lucke, however, has repeatedly stated a very clear position on euro membership. He advocates a right to leave the eurozone and suggests that the southern European members should exit the single currency. "Exiting the euro is the best option to bring back wealth and security to southern Europe," he told Germany's Manager Magazin, a monthly business publication, in April.

Despite the AfD's problems to speak with one voice, Tilford says its euro policy cannot be labeled as Tea Party-like: "The German government is saying we're not going to pool risk, we're going to proceed with a strategy that has very much damaged the European economy, i.e. austerity in the south, and everything will be okay in the end," he said.

"To my mind that sounds more like a Tea Party argument than the AfD one, which says, this cannot work because it involves us pooling risk and transferring power to other European countries."

But Ulrike Guerot, senior associate for Germany at The Open Society Initiative for Europe (OSIFE), thinks AfD's economic plans are unrealistic - plus, most Germans had made their peace with the euro and did not want go back to the deutschmark, she told DW. "They rather want a different kind of social policy in Europe and a different kind of European democracy, but this is not on offer with the AfD." 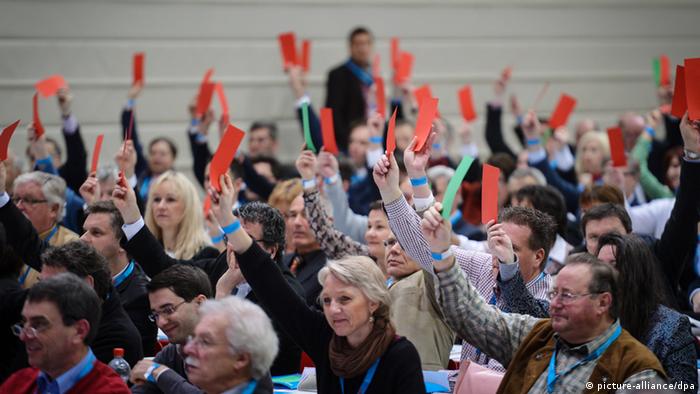 In fact, the AfD's tone on social issues does seem to have become decidedly more conservative recently - if not downright nationalistic.

Some members have said they would be open to referendums on mosque-building, the party's emphasis on traditional family values has bordered on homophobia, some argue, and there has been a lot of talk aboutimmigration and whether and when non-German EU citizens should receive social benefits.

"Only those who have paid into our system should be granted the appropriate payments. And that certainly doesn't apply to unemployed foreigners who've never had anything to do with Germany," AfD spokesman Alexander Gauland said.

The comment was in response to a debate around what's been dubbed "social tourism." It came to the fore after an unemployed Romanian mother, who lives in Germany, sued Leipzig's job center for not granting her a certain type of benefit payment. She lost her case.

At the same time, the AfD is struggling with the big problem that any new political party faces - herding all the politically disaffected Germans who have joined over the past year.

"There are differences between being euro-critical, EU-critical, and Europe-critical. We are critical of the euro and the EU, but we are pro-European," Gauland said.

What exactly that entails, is unclear, and it's that lack of a clear message that makes the AfD hard to pin down. It was the reason Thilo Sarrazin, who is known for his populist, anti-immigration rhetoric, turned down an offer to join the party.

He compared the AfD to what he called the "chaotic bunch" the Greens were in the 1980s. They need to "bring some order" to the party first, he advised.

There were twice as many right-wing attacks on refugee shelters in Germany in 2013 as the year before. The German government and refugee groups in the country are alarmed by the development. (06.03.2014)