United against the European Union | Europe | News and current affairs from around the continent | DW | 29.03.2014

EU critic and UKIP chairman, Nigel Farage, is finding fans in Germany, although the EU skeptics in the Alternative for Germany (AfD) party have ruled out collaborating with their British euroskeptic counterparts. 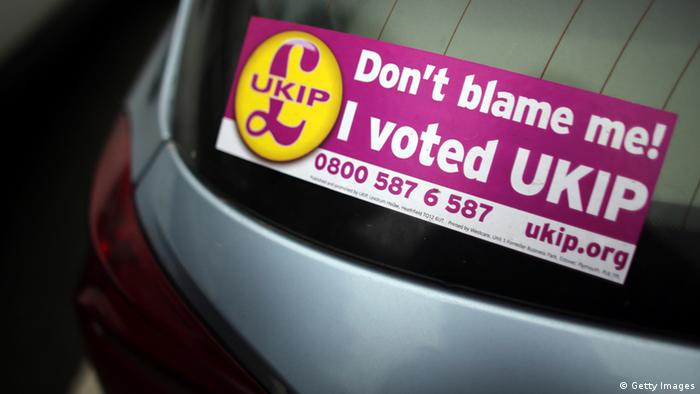 All the seats in the hall are packed. A tense silence erupts into thunderous applause when Nigel Farage, the head of the UK Independence Party, takes to the stage. The audience waves purple and yellow UKIP flags to welcome him. Emotions are running high: the crowd has been warmed up by the Euro-skeptic words of the previous speakers Marcus Pretzell and Martin Renner, who are both members of the German anti-euro party Alternative für Deutschland (AfD).

The youth organization of the AfD, the socalled "Junge Alternative" - or "Young Alternative" - has certainly shelled out for this event, which is taking place in one of the most expensive hotels in Cologne. But the only really young people at the hotel tonight are the organizers of the event. The majority of the audience members are far beyond fifty, and most have a traditional air about them: these are typical AfD supporters.

At the last AfD party convention, the federal executive board of the party actually made it clear that it didn't want any links to UKIP. So how did the common event come about? The top candidate of the German state North-Rhine Westphalia, Marcus Pretzell, attempts to explain:

"We want to stimulate debate in Germany, and that means debating - with whomever it may be. And UKIP, just like any other democratic party in Europe, is part of that." But Pretzell added that that doesn't mean that AfD would be working with UKIP in the European Parliament. The AfD politician explained that even though Nigel Farage is a vibrant politician, Germany is not an island in the Atlantic but is in the middle of Europe, making different political views necessary. 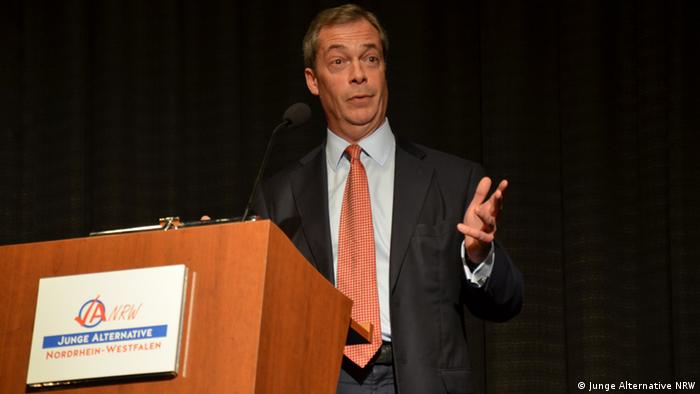 German-British understanding dressed up in tweed

Despite these few points of contention, nothing this evening was left up to coincidence. Journalists attending had to sign an agreement about the public use of images and recordings from the conference, critical questions were not welcome during the press conference. Even during the panel discussion with Nigel Farage and Marcus Pretzell only selected questions, which had to be submitted in advance, were permitted. Even Marcus Pretzell's dark green suit and waistcoat made of British tweed and combined with a red tie seemed staged, especially since Pretzell usually tends to wear jeans and present himself as in touch with the common citizen. The purple pound signs on Nigel Farage's black socks, which were revealed as his pants slipped up his legs, also seemed to be a premeditated detail.

Liberal-conservative and close to the people - that is how Pretzell describes the AfD. He doesn't like the party to be called populist. In an interview with DW, he emphasized that it would be wrong to categorize the AfD as right-leaning.

What AfD founding member Martin Renner has to say, paints a rather different picture, however. "Germany has to insist on all immigrants taking on and living within our system of values, traditions and legal and moral standards." The assimilation of parallel societies, the threat of an Islamization of German cities and poverty-driven migration - those are the set phrases that he uses again and again. 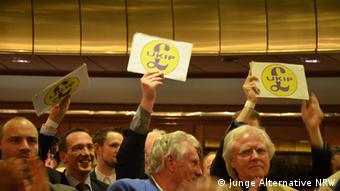 Supporters of UKIP and Farage came to the convention in Cologne

Comparisons with the Soviet Union

"Every week, 4,000 immigrants enter the United Kingdom," Nigel Farage says. He is visibly enjoying the attention, makes dramatic pauses, gesticulates, uses the stage's entire space and draws laughs. Without the organizers' signs on the doors, people might think they'd stepped into a political cabaret.

Nigel Farage chairs the anti-EU and right-wing populist UKIP party in Britain - a group seeing increasing success with voters. Farage is an absolute opponent of the European Union, and his declared goal is to take Great Britain out of the EU. As a member of the European Parliament, he has developed a reputation for controversy.

His fraught relationship with Martin Schulz, his provocative statements about van Rompuy or Angela Merkel's rigid approach to the eurozone crisis earned him repeated laughter and applause, including from the Cologne residents on hand.

"The level of knowledge of Herman van Rompuy across the whole of Europe was at two percent. And after I told him his fortune, it went up to four percent," he says. The truth or falsity of what he claims appears to weigh less than whether it will bring applause.

Farage views the structure of the EU as a lie, saying the goal has always been to create what he calls a "United States of Europe." But he warns the result would be a framework resembling that of the former Soviet Union and its undemocratic leadership and not the United States of America. Right from the start, he adds, the economically powerful states in northern Europe would be burdened - and it's in those countries, in particular, where he sees skepticism of the European project taking hold. 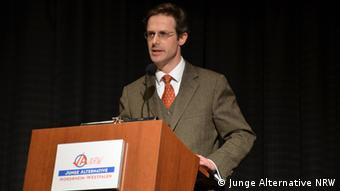 Pretzell's chances for entering the European Parliament are good

Farage's statements about the concept of the EU precluding democracy go too far for the top AfD candidate in the state, Marcus Pretzell. After all, he is seeking election into the European Parliament in May. Now that the requirement of his party earning at least five percent of the vote has been annulled, his chances are good.

Pretzell would be satisfied with reforming European institutions, such as the European Commission, the European Parliament or the Council of the European Union. He stresses that the reform agenda is what sets the AfD apart from the UKIP, explaining that the AfD's goal is greater inclusion for voters in the legislative process.

The politician would like to see the option of voter referendums - like those employed in the United Kingdom - introduced in Germany and at the EU level.

"The nice thing about the UKIP and the AfD is that we're going down the same path, but we don't have the same goals," Pretzell says.

With astonishment and incomprehension, many Europeans watched as Tea Party followers paralyzed the US. But some politicans worry the European Union could soon find itself in a similar situation. (24.03.2014)

Voter turnout in Europe is declining, membership in political parties is shrinking. Young people prefer would rather spend their energies elsewhere. Are Europeans turned off by politics? (24.03.2014)

Essay: What's Europe to me?

In the run-up to European Parliament elections, DW wants to hear from you - yes you - on what is and isn't working in Brussels. Is it human rights or immigration, democracy or lobbyists? Or do you plan to vote at all? (18.03.2014)