Police in Georgia used water cannon and tear gas on protesters demanding a rerun of the nation's recent tightly contested elections. The opposition has accused the ruling party of vote-buying and threats against voters. 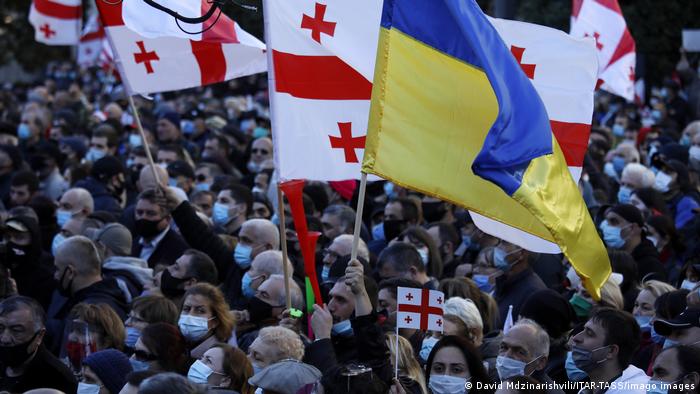 Tens of thousands of opposition supporters gathered in the Georgian capital of Tbilisi on Sunday, rejecting the result of the ex-Soviet nation's tightly-contested parliamentary elections last month.

Earlier, some 45,000 opposition supporters rallied outside the Georgian parliament, denouncing alleged fraud in the October 31 election in which the ruling Georgia Dream party claimed victory.

The demonstrators, most of them wearing protective masks due to coronavirus concerns, vowed daily protests until a fresh vote was called.

The result gave the Georgia Dream party the right to form a government, but eight opposition parties, including UNM, said they would boycott the parliament. The opposition accuses the ruling party and its supporters of vote-buying, threats towards voters and election observers, and violations during the counting process.

An alliance of more than 30 opposition parties have given the ruling party's founder, billionaire businessman Bidzina Ivanishvili, a Sunday night deadline to dismiss CEC head Tamar Zhvania  and start talks on a fresh election.

Inflation and boycotts could spell trouble for Tunisia 17.09.2022

With political conflict escalating and inflation rising, Tunisians are pessimistic and strapped for cash. Many are considering leaving the country. Others are preparing to protest — again.