After a field experiment between 2013 and 2015, genetically modified mosquitoes are breeding in Brazil. According to the researchers' original plan, all released mosquitoes and their offspring should have died. 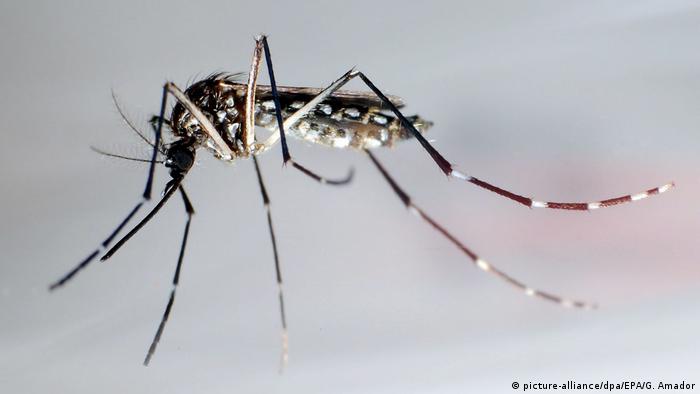 The genetically modified mosquitos were supposed to produce only infertile offspring.

An attempt to contain the populations of the yellow fever mosquito Aedes aegypti in Brazil may have failed. It appears that gene mutations have been transferred to the local population.

The British company Oxitec had released about 450,000 male mosquitoes every week in the city of Jacobina in the Bahia region with official permission over a period of 27 weeks. The experminet was designed to control the infectious diseases dengue, zika and yellow fever.

The gene modification called OX513A in the mosquitoes was designed in such a way that the first descendant generation of the mosquitoes, known as F1, would not reach the adult stage and thus not be able to reproduce.

Brazil: Can dengue fever be prevented?

The gene modification of the released mosquitoes also produced a fluorescent protein that made it possible to distinguish the first F1 generation from other mosquitoes.

They came to the conclusion that parts of the gene alteration had unexpectedly migrated into the target population of local mosquitoes.

Gene modification was passed on

In the different samples, between 10 and 60 percent of the mosquitoes carried corresponding changes in the genome. The study was published in Nature: Scientific Reports on September 10.

(Note from the editors: Oxitec responded to the publication with a counterstatement on 18 September. Oxitec argues that possibly surviving future mosquito generations will continue to produce infertile offspring - in other words, the carriers of the genetic alteration will die out over a manageable period of time.)

However, it was already known from previous laboratory experiments that a small proportion of about three to four percent of OX513A descendants can reach adulthood; the scientists had assumed that those would be too weak to reproduce.

The authors of the study found that the GM mosquitoes were equally suitable as carriers of infectious diseases as the mosquitos were before the experiment.

The Yale research team around Jeffrey Powell warns that the newly formed mosquito population could possibly be more robust than the mosquitoes were before.

The authors conclude: "These results demonstrate the importance of having in place a genetic monitoring program during releases of transgenic organisms to detect unanticipated consequences".

Biologists critical of genetic engineering go one step further with their criticism, among them the Brazilian biologist José Maria Gusman Ferraz: "The release of the mosquitos was carried out hastily without any points having been clarified," Ferraz told the newspaper Folha de S. Paulo.

The Munich-based research laboratory Testbiotech, which is critical of genetic engineering, accuses Oxitec of having started the field trial without sufficient studies: "Oxitec's trials have led to a largely uncontrollable situation," CEO Christoph Then told the German Press Agency, dpa. "This incident must have consequences for the further employment of genetic engineering", he demanded.

The field trial in Brazil did not use the controversial Gene Drive method, in which mosquitoes are given a very assertive gene that is always dominant during reproduction.

Researchers who experiment with Gene Drive in strictly isolated laboratories hope to eventually use the method to permanently eradicate entire mosquito populations. However, such experiments cannot be reversed and have therefore never been carried out in the open field.