A Hamas-backed decision to require unmarried women to gain their "guardian's" approval to travel sparked outrage. The Islamic judge who imposed the rule, has now agreed to revise it. 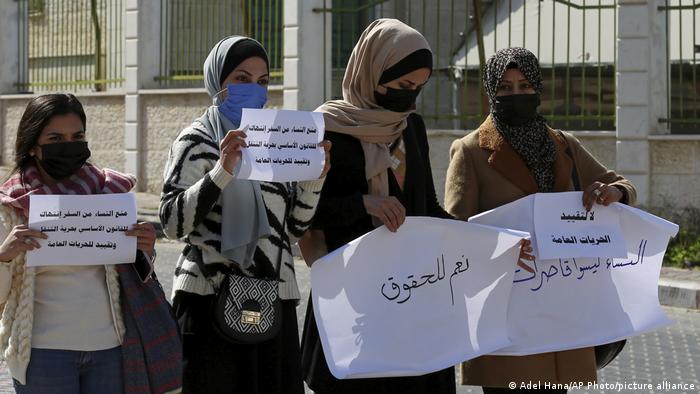 The ruling comes amid existing restrictions on travel from Gaza in neighboring Israel and Egypt, citing security concerns arising from Hamas policies

The top Islamic judge in Gaza said on Tuesday that he would revise a recent controversial ruling that prohibited unmarried women from travelling without permission from their "male guardians", local media reported.

The ruling, announced on Sunday, prompted a backlash from rights groups in Hamas-run Gaza, saying it violated anti-gender-discrimination Palestinian laws.

Protesters marched against the decision to the office of the council's chairman, Hassan Jojo, who had approved the ruling.

"We have agreed to redraft this ruling," Jojo told reporters, but he did not specify any changes to the decision, according to Reuters.

'Whether she is a virgin or not'

On Sunday, the Islamist Hamas-backed Supreme Council of the Sharia Judiciary ruled that young men under the age of 18, children of separated parents and unmarried women could not travel without approval from their male guardians.

"An unmarried female, whether she is a virgin or not, should not travel without permission from her guardian," a statement released by the council read.

The ruling also included a section about travelling with children after the parents separated.

"A father is prohibited from traveling with his minor children who are under their mother's custody without the consent of their custodian; and if she agrees, a non-objection travel paper shall be issued from a court of first instance duly."

The European Union Delegation to Palestinians raised concerns over the ruling. "This decision is discriminatory and violates the human rights of Palestinian women, and is clearly a step in the wrong direction," the delegation said on Twitter.

The Euro-Mediterranean Human Rights Monitor in Geneva said in a statement that the decision was breaching Palestinian laws.

"The ruling authorities in the Gaza Strip should ensure the application and respect for human rights principles and refrain from issuing discriminatory directives or circulars that violate relevant domestic and international laws," the statement read.