Gaza ceasefire breaks down just hours after it began

A three-day ceasefire agreed by Israel and the Islamist militant group Hamas has fallen apart within a few hours of it coming into effect. The two sides have accused each other of breaching the temporary truce. 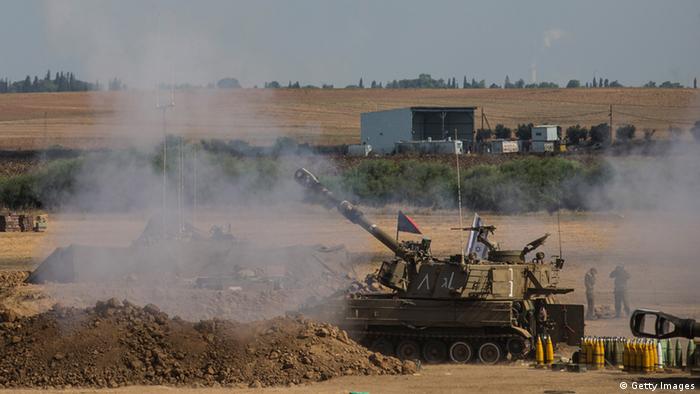 The ceasefire, which was announced by the United States and the United Nations early on Friday, appeared to hold for a couple of hours, but reports of heavy clashes then quickly emerged from an area near the southern Gaza city of Rafah.

The Israeli daily newspaper Haaretz, meanwhile, reported that Prime Minister Benjamin Netanyahu's government had declared the ceasefire to have failed.

A Haaretz reporter said an Israeli representative had informed the United Nations top official in the region, Robert Serry, about the government's decision to resume its offensive in Gaza.

Earlier, Netanyahu's office released a statement in which it blamed Hamas for breaking the truce.

"Once again, Hamas and the terror organizations in Gaza have blatantly broken the cease-fire to which they committed, this time before the American Secretary of State and the UN Secretary-General," the statement said, without providing details.

The ceasefire had caught some by surprise when it was announced simultaneously at United Nations headquarters in New York and in New Delhi early on Friday,# where US Secretary of State John Kerry has been meeting with officials from India's new government.

Working towards a more durable truce

At a hastily called press conference, Kerry warned that while he was pleased that the parties to the conflict had agreed to the truce, the conflict was far from over.

"This is not a time for congratulations and joy, or anything except a serious determination, a focus, by everybody to try to figure out the road ahead," Kerry said shortly after the deal was struck. "This is a respite. It's a moment of opportunity, not an end; it's not a solution. It's the opportunity to find the solution."

To this end, Egypt has called on the Israelis and the Palestinians, including Hamas, to enter talks in Cairo aimed at reaching a more durable ceasefire.

The Associated Press cited an Egyptian statement issued on Friday in which it said the negotiations were to discuss "all issues of concern to each party within the framework of the Egyptian initiative."

Egypt has been trying to broker an end to the fighting for weeks. Previous shorter, temporary ceasefires were only partially successful, with some unraveling immediately after coming into effect.

The Palestinian death toll from Israel's more than three-week long offensive on the Gaza Strip climbed to more than 1,450, the vast majority of whom were civilians, according to the Gaza health ministry. Around 60 Israelis have been killed, most of them soldiers.

The United Nations and United States have announced an unconditional 72-hour ceasefire for the Gaza Strip to start on Friday morning. Israel had come under increased pressure to halt its military operations. (31.07.2014)

US slams attack on Gaza school, resupplies Israel with weapons

The White House has described the shelling of a UN school in Gaza as "totally indefensible," adding that Israel appears to be responsible. Meanwhile, the US has offered to replenish Israeli grenade and mortar supplies. (31.07.2014)