Gay pride march in Serbia takes place amid violence | Europe| News and current affairs from around the continent | DW | 10.10.2010

Serbia's first gay pride parade in almost a decade was marked by riots and violent clashes with police. The march has split the country, with the Serbian Orthodox Church and some politicians speaking out against it. 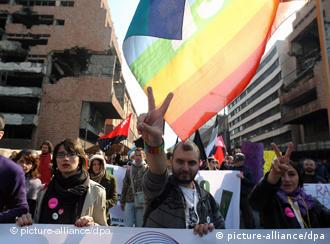 About 500 people marched through central Belgrade

At least 110 people, most of them police, were injured and nearly 200 were arrested at Serbia's gay pride march in Belgrade on Sunday.

Hundreds of opponents took on riot police with bricks, flares, bottles and Molotov cocktails. Most of the injured were taken to hospital, trailed by hooligans who tried to enter the emergency room but were stopped by police.

More than 5,000 officers, backed up by police helicopters, sealed off the central streets in the Serbian capital for the march. Rioters reportedly clashed with security at several locations, setting parked cars on fire, overturning garbage containers and destroying shop windows and street signs.

Rioters also trashed the entrance to the Serbian state television building RTS and the seats of Socialist Party leader Ivica Dacic and the ruling Democratic Party, setting one part of the latter building on fire. 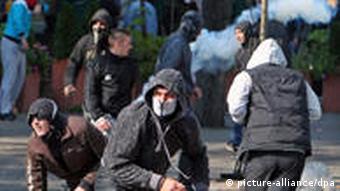 Despite the violence, the actual parade went off smoothly. Around 500 gays, lesbians and supporters, including Serbian and foreign officials, gathered for the short 15-minute march, some chanting, "We have succeeded."

Serbia's gay community has tried on two previous occasions to organize a gay pride parade. In 2001, a planned parade was disrupted by violence before it could start, and last year the march was canceled at the last minute amid extremist threats.

The march has polarized the country, with some politicians supporting it and other groups, including the powerful Serbian Orthodox Church, speaking out against it. On Saturday, thousands of opponents marched through Belgrade calling for the parade to be canceled.

"This should not have happened," one younger man told news agency dpa. "I do not support the parade but trashing the city is pointless. It is a sad image we are sending to the world."

The annual EuroPride gay rights rally was staged in a former Warsaw Pact country for the first time on Saturday. Thousands of people marched through Warsaw - thousands also opposed the event. (17.07.2010)