Gauck expresses unease at the prospect of a Left state premier

German President Joachim Gauck has expressed unease at the prospect a far-left party leading a government in the state of Thuringia. The Left party partially has its roots in the former East Germany's communist party. 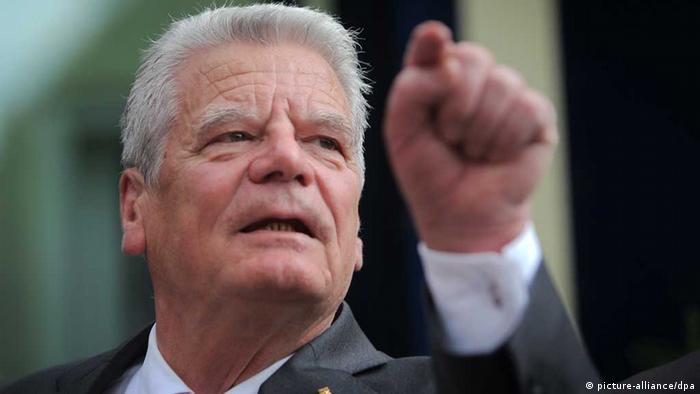 Speaking in an interview to be aired on ARD public television on Sunday, German President Joachim Gauck said he was uncomfortable with the prospect of the Left party's Bodo Ramelow becoming the premier of Thuringia.

"Is the party actually so far removed from the beliefs that the SED (East German communist party) once had in repressing people here that we can fully trust it?" Gauck asked during the interview.

"There are parts of this party where I, like many others, have problems developing this trust," the president added.

At the same time, Gauck stressed that he respected the results of the recent Thuringia state election, despite his misgivings.

The German president, whose role is largely ceremonial and usually stays above the political fray, was a Lutheran pastor and human rights activist in former East Germany. After reunification in 1990, he headed the government agency that is the custodian of the files of East Germany's Stasi secret police.

Even before the interview was broadcast, the president faced criticism over his comments.

Left co-chairperson Katja Kipping told the mass-circulation Bild am Sonntag newspaper that Gauck's statement was "not right for a president."

"I reject in every way his doubts about the democratic attitude of our members and voters," she said.

However, some also expressed understanding for the president's comments.

"The president only said what many who experienced the injustice that prevailed in the German Democratic Republic (East Germany) are thinking," the co-chairperson of the Greens, Cem Özdemir said. The other co-chair of the party, Simone Peter, however, said the president needed to stay out of party politics.

Ramelow, who grew up in West Germany and appears set to become the Left's first state premier has declined to comment.The Left party, which finished second to Chancellor Angela Merkel's Christian Democrats in Thuringia in the mid-September state election, is in negotiations aimed at forming a coalition government with the Social Democrats and the Greens.

The euroskeptic Alternative for Germany (AfD) party has taken big strides forward in regional elections in two eastern German states. Results are emerging from votes in Thuringia and Brandenburg. (14.09.2014)

The socialist Left party could win its first state premiership in Germany on Sunday at the Thuringia election, in coalition with the center-left SPD. Bodo Ramelow is ready for the job. (14.09.2014)

Merkel warns against Left alliances ahead of Thuringia and Brandenburg elections

The German states of Thuringia and Brandenburg are due to choose new state parliaments. Chancellor Merkel has warned her federal coalition partners the Social Democrats against becoming junior partners to the Left Party. (14.09.2014)