Merkel warns against Left alliances ahead of Thuringia and Brandenburg elections | News | DW | 14.09.2014

Merkel warns against Left alliances ahead of Thuringia and Brandenburg elections

The German states of Thuringia and Brandenburg are due to choose new state parliaments. Chancellor Merkel has warned her federal coalition partners the Social Democrats against becoming junior partners to the Left Party. 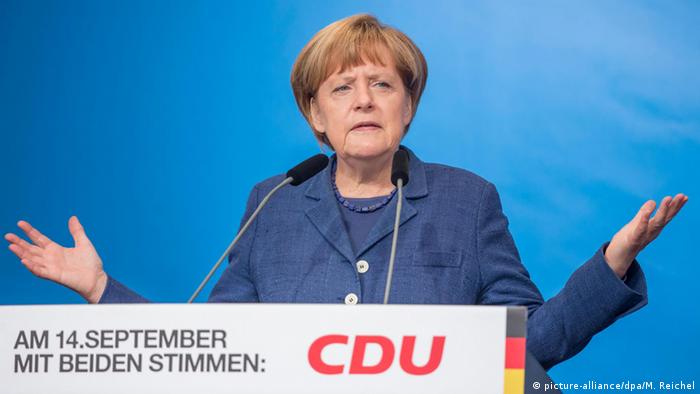 A total of about 4 million people are eligible to cast their votes in elections to decide who will head regional parliaments on Sunday.

According to pre-election surveys, Chancellor Angela Merkel's Christian Democrats (CDU) are expected to receive the most votes in Thuringia. However, they may lose the leadership of the state after 24 years if the Left party, which is polling in second place, joins forces with the center-left Social Democrats (SPD).

Referring to reports that her federal grand coalition partners had not ruled out aligning with the Left as junior partners - or both the Left and the Greens - Merkel warned that such an alliance would diminish the SPD.

"There's a big national party here, the SPD, with a proud history…who would have thought that. A big, proud party like the SPD is making itself small," Merkel said in a speech on Saturday in the town of Apolda.

The chancellor also lamented the Greens' consideration of an alliance with the Left, saying it would be contrary to the party's history, which dates back to the "democracy now" movement in the former east.

"Karl Marx is to be carried into the offices of the state government. That just cannot be," Merkel said.

It would be the first time the Left, which has roots in the former communist East Germany, would have a state premier elected in a united Germany. However, that potential premier, Bodo Ramelow, is said to be a moderate within the party.

In Brandenburg, the rural state which surrounds Berlin, the SPD already rules with the Left, though as the senior coalition partner rather than the junior.

Polls indicate another SPD victory there, with Dietmar Woidke expected to continue as premier. The SPD has led Brandenburg for the past 24 years heading various coalitions.

Merkel will also be keeping a close eye on the eurosceptic Alternative for Germany (AfD) party, which just a fortnight ago entered its first regional parliament, in the neighboring eastern state of Saxony.

The AfD is polling about 8 percent in both Thuringia and Brandenburg.