Gamescom 2017 reveals boon and bane of the gaming industry | Business| Economy and finance news from a German perspective | DW | 23.08.2017

Gamescom 2017 reveals boon and bane of the gaming industry

Cooperative play is the buzz phrase at Gamescom 2017. But in spite of the excitement around eSports and unprecedented attention from politics, the theme "just play together" might only apply to consumers, not creators. 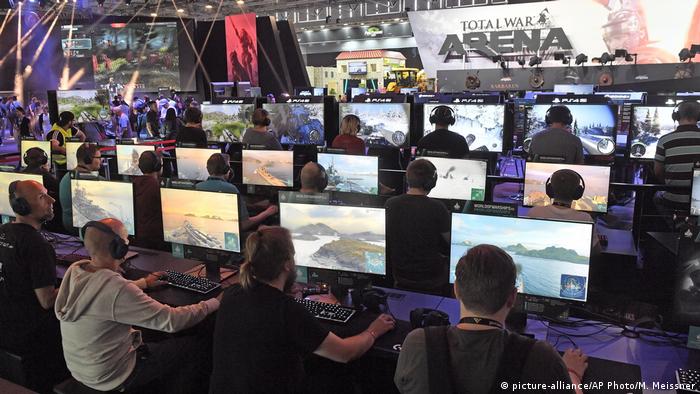 The computer and video game industry has long outgrown its niche existence. With more than a billion people reportedly playing games on a regular basis, and revenues expected to rise to $6 billion (5.1 billion euros) in 2018, gaming has become both a phenomenon and a mass market that's much more than just entertainment.

Increasingly, gaming is being recognized as an economic and cultural asset, with applications in multiple industries including aerospace and defense. eSports has grown into a mass movement filling entire stadiums, awarding millions of dollars in prize money and even being considered as a medal event for the 2024 Olympics Games.

Nowhere is this evolution more visible than at Gamescom, the world's largest trade fair for computer and video games. Now in its ninth year, the congress is expected to draw an even larger crowd than last year, when 345,000 people descended on Cologne for five days of gaming, gossiping and geeking out.

Diversity in gaming: ambition vs. reality

As usual the latest innovations and new game releases play an outsized role at such events, and there are many more reasons for the gaming industry to be excited these days, but the state of diversity isn't one of them.

On Tuesday, while thousands of game enthusiasts flooded the conference halls to play the long-awaited fourth installment of Age of Empires or snatch a photo of German Chancellor Angela Merkel, "Women in Tech Day" only attracted around three dozen people, including one lone man.

German games researcher Sabine Hahn attributed the sorry turnout to a lack of publicity. Indeed, while other events and game releases were promoted on a grand scale, the "Women in Tech Day" event didn't even make it into the official guide.

Hahn brought up several issues that continue to plague the gaming industry. Aside from the underrepresentation of women - only a quarter of software developers are female - and facing a gender pay gap - they earn 20 to 25 percent less than their male counterparts - Hahn also addressed the lack of women in top management positions. 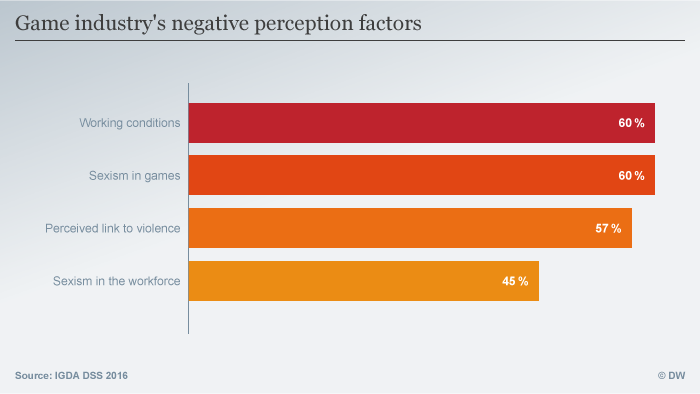 The 2016 survey among developers shows how sexism in the workforce is regarded as one of the leading factors that create a negative perception of the industry among developers. Over 70 percent of respondents were male

Albeit only based on anecdotal evidence, the consensus among the presenters was that companies and industry organizations still don't take diversity seriously enough. Comparing the Gamergate controversy, a 2014 harassment campaign conducted primarily through the use of the hashtag #GamerGate, to US President Trump's proposed Muslim ban, Edwards pointed out how game companies acted "quickly and politically" to the latter but remained notably silent on the former. "In my view this shows a certain kind of hypocrisy," she told DW.

That's despite there being a business case for increasing diversity in tech, said Hahn, citing a 2004 study showing how companies with the best financial performance had more women on their top management teams than lower-performing companies.

Retro gaming: back to the roots

While female creators still wait for a level playing field, cooperative and fair play among consumers looks much brighter. After all, gaming has brought people together since its inception. The social aspect is a major reason why a growing minority of gamers is (re-)discovering old console games.

"Genres like jump and run or car racing games have existed for 40 years," said René Meyer, a retro gaming enthusiast and console collector from Dresden. "They are as much fun today as they were back in the day." 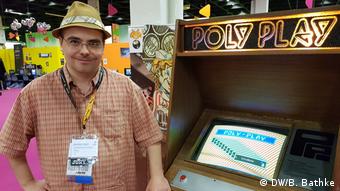 Games journalist and console collector René Meyer standing in front of Poly Play, the only arcade game developed in the GDR, in the Gamescom retro games area

Most retro games require at least two players (in the same room, that is.) Without artificial intelligence, people needed to square up against each other instead of battling "bots" or the "computer."

"Each console released since the 70s came with at least two controllers," said Meyer, who grew up in East Germany and started writing about computer games after Germany's reunification.

Together with roughly 300 other organizers, Meyer runs the retro exhibition at Gamescom. With more than 40 exhibitors, the museum-like area is larger than the eSports arena.

Some game studios are even bringing back consoles. Last November, three decades after it first hit the market, Nintendo brought back its cult Entertainment System console with 30 pre-installed games. Meyer and other lovers of retro games said it's a mix of simplicity and challenge that makes them attractive after all those years.

A developers' skill set is in high demand 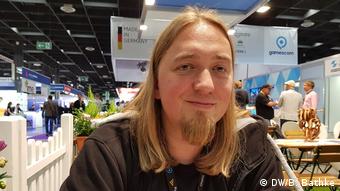 Unsurprisingly top talent gets routinely poached by heavyweights from other industries, whose financial prowess most gaming companies cannot match.

Christopher Kassulke is all too familiar with losing staff to firms from other industries: "Even just five years ago, we'd lose 10 percent of our staff to companies like SAP and BMW each year," said Kassulke, who co-founded Bavaria-based game studio HandyGames in 2000. "That's why we are now only investing in people who have a real passion for games."

The call for more state support has been reverberating through the trade fair halls even before its gates opened on Sunday. After all, Germany is the fifth-largest market for games - but sales of German-developed games only make up 6 percent of the total domestic market.

And if Germany's gaming industry were to square up against Canada, this year's Gamescom partner country, it would lose badly.

Canada plays in a whole other league

In spite of its much smaller population of 35 million, Canada boasts the world's third-largest gaming industry with 400 studios and roughly 20,000 full-time employees. Only two countries - Canada's neighbor to the south and Japan - are home to more studios.

Compare that to Germany and its population of 83 million, where a mere 8,000 developers were creating virtual worlds in 2015. The success of Canada's gaming industry is often attributed to tax advantages and other forms of public funding. Indeed, public funds make up a meager 2.6 percent of the entire funding of Germany's gaming industry.

However, Wolfgang Hamann, CEO of Vancouver-based KoolHaus Games, said the tax credits gets too much press, not least because tax incentives vary significantly from province to province. Being headquartered in British Columbia, KoolHaus gets about half of what it would get in Ontario. 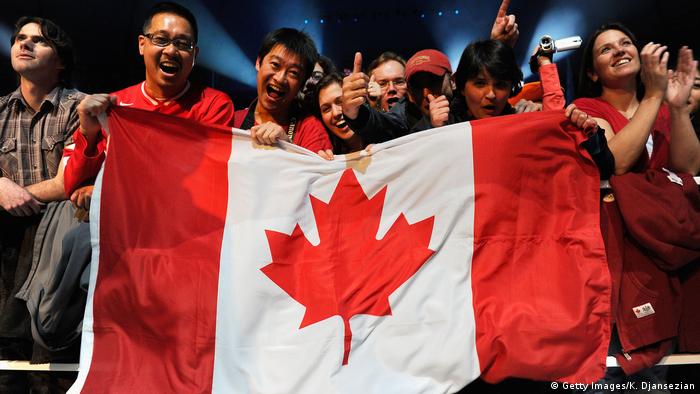 In the Canadian province of Ontario, public funds make up a whopping 32 percent of the entire funding of the province's gaming industry, according to a Hamburg Media School study. About 30 percent of salary costs in Canada are refunded at the end of the year through taxes

To Hamann, who was born in Germany, the main driving force behind Canada's unrivalled success is its "world-class training and educational infrastructure."

Similar to a successful game, of course, many things needed to come together to turn Canada into a gaming powerhouse. An industry-friendly environment certainly matters, but high disposable income, low production costs, free trade agreements with the US and Europe as well as said highly educated workforce also played in Canada's favor.

And even though quite a few Canadians hire on with studios in the US and elsewhere, many return to the Maple Leaf country 10 or 15 years later, Hamann said. Similarly, German game studios are also increasingly seeing older developers return after spending a number of years with bigger companies, said HandyGames CEO Kassulke.

"Although the money is good, many of them say: 'I've had enough of a big corporation, it's time to really create something.'"