Gambia's justice minister has claimed that former leader Yahya Jammeh stole around $50 million from state coffers via a state telecoms company. Jammeh was forced to step down in January after 22 years in power. 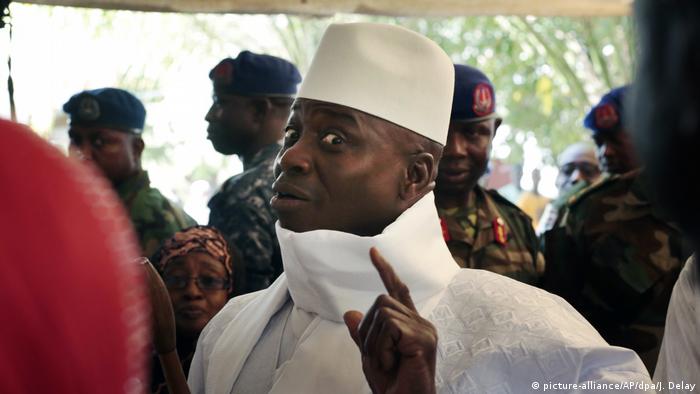 A Gambian court on Monday froze the assets of Yahya Jammeh after it emerged the former leader had siphoned off around $50 million (about 44.5 million euros) in public money during his 22 years in power.

"President Yahya Jammeh personally or under his instructions directed the unlawful withdrawal of at least $50 million," from the Central Bank, said Justice Minister Abubacarr Tambadou. Those funds were then reportedly transferred through the state-owned telecoms firm Gamtel into his own personal accounts.

While the former Gambian president had long been suspected of using the state's purse for his own gain, Monday's hearing marked the first time the new government had put an exact figure on what it believes Jammeh plundered. The veteran leader was ousted and exiled in January.

In response to the massive fraud revelations, Tambadou said the Justice Ministry had "obtained a court order freezing or placing a temporary hold" on Jammeh's known remaining assets in the country. These include 88 bank accounts, 131 properties and 14 companies linked to the former strongman.

West African leaders extend deadline for Jammeh to step down

A noon deadline set for the Gambia's Yahya Jammeh to cede presidential power has been deferred. Troops from five nations stood by for action as regional leaders flew in to make a final plea to the long-time leader. (20.01.2017)

According to Gambia's solicitor general, Cherno Marenah, Jammeh had for years used public money to feed his lavish lifestyle, which included a fleet of expensive cares, a private jet and a mansion in the United States.

An investigation by the Reuters news agency also found that in 2012 and 2013 the veteran leader had transferred more than $8 million from a bank account linked to his charity foundation, the Jammeh Foundation for Peace, to himself rather than to the foundation's projects.

Cherno said a commission inquiry would also be set up next month to decide how to use the seized assets.

Jammeh was ousted from office after Gambia's opposition United Democratic Party (UDP) won an absolute majority in parliamentary elections in April, and then after independent candidate Adama Barrow sensationally defeated the strongman in the December presidential election.

The defeated leader then fought for weeks to hold on to the presidency, before finally standing down under the threat of military intervention from Senegal.

As part of the agreement, Jammeh was granted exile in Equatorial Guinea.

Aside from the years of corruption and money laundering under Jammeh, investigators are also probing reports of dozens of forced disappearances as bereaved relatives have come forward clamoring for justice.