G8 vows to combine austerity and growth | World | Breaking news and perspectives from around the globe | DW | 20.05.2012

World leaders committed to finding a balance between budgetary restraint and stimulus spending to address the eurozone crisis. At a summit with no real losers, France's new president saw his hand strengthened most. 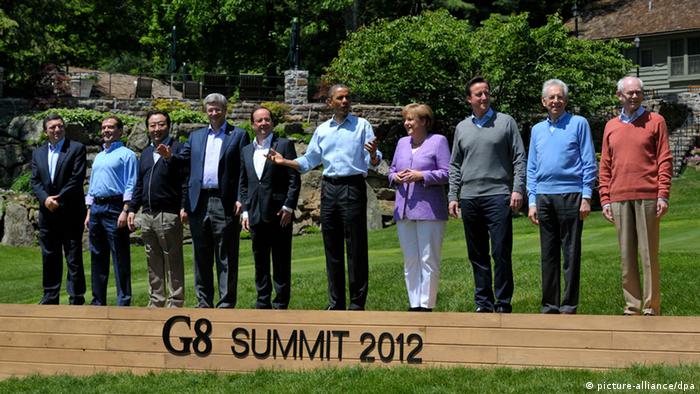 The heads of the world's eight leading industrialized countries finished a meeting at Camp David hosted by US President Barack Obama by expressing their commitment to balancing austerity measures with stimulus spending.

"We agree on the importance of a strong and cohesive eurozone for global stability and recovery," the leaders said in a final G8 joint communique on Saturday. "We affirm our interest in Greece remaining in the eurozone while respecting its commitments."

How to reinstate stability in Europe's common currency zone has been the topic of long-running debate between German Chancellor Angela Merkel, who has called for budgetary restraint and other austerity measures, and leaders including newly elected French President Francois Hollande, who campaigned on a platform that called for growth to help lead the eurozone out of its crisis.

Merkel played down policy differences on Saturday by saying, "Solid finances and growth are inseparable and should not be put into contrast."

The no surprises summit

Few were, therefore, surprised that the official statement issued by G8 leaders called for both growth and austerity.

"We commit to take all necessary steps to strengthen and reinvigorate our economies and combat financial stresses, recognizing that the right measures are not the same for each of us," the statement said. 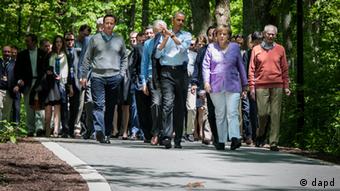 According to Thomas Kleine-Brockhoff, the German Marshall Fund's senior director of policy programs in Washington, the risk premiums that countries would be forced to pay to roll over debt are driving discussions on how to solve the euro crisis - more so than Merkel's politics.

"If the Europeans were to follow Obama's advice and decide on a debt-financed stimulus package, the markets would immediately punish a country adopting such a policy," he told DW in an e-mail. "Merkel understands this and has therefore resisted the pressure. This does not mean she is against growth. In fact, she leads a country that has had solid growth in recent years."

Merkel's so-called opposition to growth has been overemphasized, according to Thomas Klau, head of the Paris office and a senior policy fellow at the European Council on Foreign Relations (ECFR).

"Even before Hollande's election, Merkel had expressed her readiness for a deal on growth," he told DW. "While the summit reaffirmed that the eurozone appears to be heading toward a new compromise on growth, I don't think this was a transformative moment in that debate." 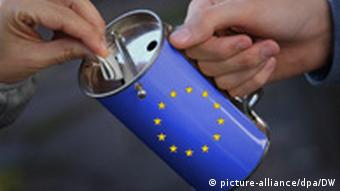 Part of the new compromise, according to Kleine-Brockhoff, could be using European Union funds to enhance investment in the hardest hit countries, which would let nations stimulate the economy without going further into debt.

A meeting of European Union leaders on Wednesday - as well as another in June - will discuss further how to merge stimulus spending, deficit reduction and structural reform with spending funded by common European bonds, a step repeatedly refused by Berlin and the European Investment Bank.

A good day for Hollande

While there were no announcements of major policy changes, Klau considers the summit an affirmation for Hollande, who saw his position strengthened during his first appearance at a major international conference. 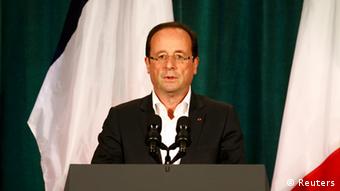 Hollande met a new group of peers at the G8 summit

In his campaign, Hollande promised voters he would renegotiate a fiscal pact that imposes budgetary discipline on EU members.

"The G8 made clear that the expectation that Hollande would be isolated with his push for a re-balancing of the eurozone policy was not borne out by events," Klau said. "In that sense it was politically a good day for him."

Leaders of the eight largest economies have affirmed their commitment on Saturday to a "strong and cohesive" eurozone with Greece as a member. They also stressed the need to promote growth and fiscal discipline. (19.05.2012)

'No one can afford to lose Germany'

Experts say that Angela Merkel is headed for a tough fight at the G8 summit to defend her strict austerity stance on the European debt crisis. But there is no solution without Germany. (18.05.2012)

Chancellor Angela Merkel flew into the US for a weekend of summit meetings, as the eurozone debt crisis threatens to escalate due to political instability in Greece and market uncertainty in Spain. (18.05.2012)