Finance ministers from the world's richest countries have agreed to back a corporate tax rate of at least 15%, to stop tax havens competing to attract tech giants like Amazon and Facebook.

Finance ministers from the G7 nations on Saturday pledged to commit to a minimum global level of corporate tax of at least 15%.

The move aims to get multinationals — particularly tech giants — to pay more into government coffers hit hard by the pandemic.

"I am delighted to announce that today after years of discussion G7 finance ministers have reached a historic agreement to reform the global tax system," said British Finance Minister Rishi Sunak, who was chairing the talks in London.

"It's complicated and this is a first step," Sunak said. 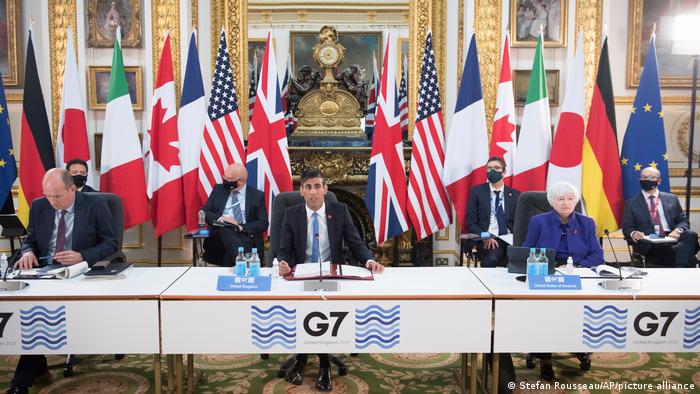 "It is very good news for tax justice and solidarity and bad news for tax havens around the world," Scholz said in a statement. "Companies will no longer be in a position to dodge their tax obligations by booking their profits in the lowest-tax countries."

"This is a starting point and in the coming months we will fight to ensure that this minimum corporate tax rate is as high as possible," said Le Maire.

US Treasury Secretary Janet Yellen said the move would "help the global economy thrive, by leveling the playing field for businesses and encouraging countries to compete on positive bases."

What is the global minimum corporate tax?

The US-led proposal focuses on creating a global minimum corporate tax rate as well as special rules to change how much tax companies pay and where it is paid.

US President Joe Biden had called for a unified minimum corporate tax rate of 15%.

The global minimum tax would be levied only on the world's 100 largest and most profitable companies.

If a company pays taxes somewhere with a lower rate, it would probably have to pay top-up taxes.

Such a move aims to end what Yellen has called a "30-year race to the bottom on corporate tax rates" as countries compete to lure multinationals.

'G7 looking out for their own'

Alex Cobham, chief executive of the Tax Justice Network, called the move a "historic moment" but slammed it as "very unfair."

In an interview with DW, Cobham said the figure should have been "at least 25%."

"The way the G7 is going about this with such a low rate…it means the benefits would have been much smaller than they could have been," the economist said.

"It shows just how unfit for purpose the OECD and the G7 are, as the rich countries set the rules for everyone else. We need to move this to the United Nations and get a deal that works for everyone, not just the G7 looking out for their own revenues," he added.

"We welcome the important progress," Nick Clegg tweeted, adding "this could mean Facebook paying more tax, and in different places."

A spokesperson for the online retail giant Amazon said the tax plan was "a welcome step forward."

"We hope to see discussions continue to advance with the broader G20 and Inclusive Framework alliance," added the spokesperson.

"We hope countries continue to work together to ensure a balanced and durable agreement will be finalized soon," a spokesperson for the global search giant said.

Following two days of talks, G7 finance ministers backed moves to force banks and companies to disclose their exposure to climate-related risks, according to a final communique seen by Reuters.

They also reiterated that digital currency projects should not operate until it meets "legal, regulatory, and oversight requirements through appropriate design and by adhering to applicable standards," the communique read.

The Day with Phil Gayle: Is a global corporate tax crackdown coming?

G7 finance ministers have called for a price cap on Russian oil. Their goal is to stop Russia from profiting from its war against Ukraine.