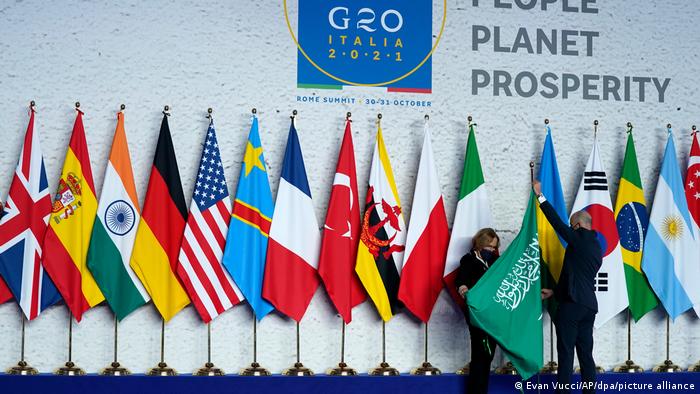 After the weekend's summit of heads of state from the world's 20 largest economies, little progress was made as key political figures gathered in Glasgow for a crucial climate change conference, COP26.

While leaders said they would stick to the goal of limiting global warming to 1.5 degrees C above pre-industrial levels, no firm date has been set for achieving carbon neutrality, according to a joint communique released by COP26 on Sunday.

At a press conference following the recognition that little progress was made during the summit, current Italian Prime Minster and G-20 President Mario Draghi said that without multilateralism "we go nowhere" in regards to addressing the climate crisis.

'I leave Rome with my hopes unfulfilled' says Guterres

UN Secretary-General Antonio Guterres expressed his disappointment over a lack of any concrete conclusions from the summit.

"While I welcome the G-20's recommitment to global solutions," he tweeted, "I leave Rome with my hopes unfulfilled — but at least they are not buried. Onwards to COP26 in Glasgow to keep the goal of 1.5 degrees alive and to implement promises on finance and adaptation for people and planet."

No assurances for ending coal-fueled power

The G-20 leaders failed to give assurances for ending coal-fueled power, according to a statement.

"We will do our utmost to avoid building new unabated coal power generation capacity, taking national circumstances into account, with a view to accelerating the transition away from coal to meet timeframes aligned with the goals of the Paris Agreement," the statement said.

Merkel pleased that Paris Accord will be stuck to

The fact that the group of the world's strongest economies agreed in principle to support the Paris Agreement's 1.5-degree target for reducing greenhouse gases was a "very, very good result" and the G-20 leaders had thus sent a "good signal" ahead of the COP26.

G20 agree on 1.5 degree climate goal, but no 'concrete commitments' yet

DW correspondent Alexandra von Nahmen said Merkel was "happy to see a joint declaration that every leader was able to sign off."

"We have to keep in mind that at previous G-20 summits there were declarations that only 19 of the G-20 leaders signed," von Nahmen added, referring to when former US President Donald Trump refused to sign on to a G-20 climate statement.

President Biden said the G-20 leaders made "tangible" progress on climate change, though he lamented the absence of Russia's Vladimir Putin and China's Xi Jinping from the talks in the Italian capital.

Biden said it's disappointing that Russia and China "basically didn't show up" with commitments.

COP26 president: 'We need to hit the ground running'

The lack of assurances after the Rome summit came as a disappointment to climate activists, who had been seeking firm assurances from the G-20 members

Earlier on Sunday, environmental activists Greta Thunberg and Vanessa Nakate penned an open letter to the media as the G-20 summit came to a conclusion.

"The climate crisis is only going to become more urgent," the pair wrote. "We can still avoid the worst consequences, we can still turn this around. But not if we continue like today."

Britain's Prince Charles addressed the G-20 leaders on Sunday morning, urging them to listen to young people who are inheriting the increasingly warm Earth, warning that "it is quite literally the last chance saloon."

Climate change: Young people around the world voice their concern