The casing around the ruined nuclear reactor at Chernobyl is crumbling, causing a renewed radioactive contamination risk. A new cover for the site is under construction - but the project is running out of funding. 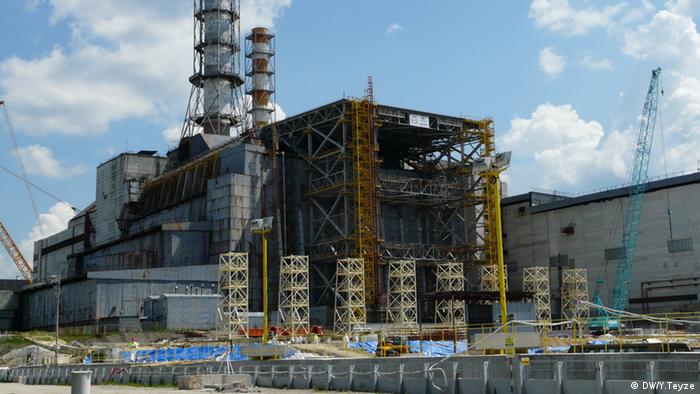 "There's no precedent for this anywhere in the world," Jochen Flasbarth said. "Of course there is uncertainty."

The German Ministry of the Environment's senior civil servant was talking about the New Safe Confinement - a new protective cover that is to be built over the stricken reactor at the Chernobyl nuclear power plant in Ukraine: 100 meters high, 165 meters long, built at a safe distance from the still radioactive ruin.

The cover will slide over the reactor on rails. It will be three times as large as St. Peter's Basilica in Rome - if it is finished. But at the moment there is no money - that's the "uncertainty" Flasbarth was talking about.

There will be a shortfall of 600 million euros by the end of the year. Construction is proving to be more expensive than expected, and funding more difficult to obtain. A Ukrainian government construction freeze now threatens the project.

Flasbarth, who is responsible for energy issues at his ministry, intends to speak with his counterparts from the G7 Group on Nuclear Issues in Bonn in mid-October. The G8 - as it was known before Russia was ejected from the group earlier in 2014 - had promised years ago to help Ukraine build the containment system. Now new money is required. 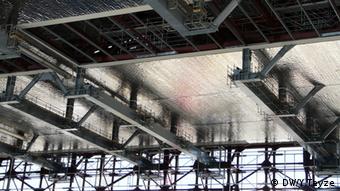 The protective cap that will cover the Chernobyl reactor

Over 28 years ago, on April 26, 1986, Reactor 4 at the Chernobyl nuclear power plant suffered a meltdown after a safety test went wrong. Around 4000 people have since died as a result, according to estimates by the International Atomic Energy Agency. Other estimates put the number at more than 100,000 dead.

The total damage has been estimated at 180 billion dollars. The area around the stricken reactor is still highly contaminated, and the concrete sarcophagus poured over the reactor in a rush after the accident has become unstable.

That's why a French consortium has spent the last few years building the new protective cover. One part is finished, and a second is still being worked on. Meanwhile, Reactor 4 is crumbling - and threatening to expose 200 tons of highly radioactive material to the environment, including the destroyed fuel rods.

The removal of these materials can begin only when the New Safe Confinement is finished, which means over 30 years will have passed since the accident. No one now expects the construction to be finished next year as planned.

"But we are now sure the relevant contracts are in such a form that will ensure we can complete the work over the next four to five years," Flasbarth said.

"It cannot be that lack of money means important work is not done," German Green Party atomic expert Sylvia Kotting-Uhl said. In the G7, the USA, Germany, Canada and Italy appear willing to spend more money, but Britain, Japan and France are holding back.

Germany has approved 80 million euros for the protective cover, with 7.65 million euros in the budget for this and next year. Everyone involved is aware this is not enough. The G7 countries will have to go without Russian help, a knock-on consequence of the on-going Russian-Ukrainian conflict.

Environmentalists say this means western states must step in. "These countries can and must make progress. In the current difficult political situation, it is especially important to demonstrate solidarity with Ukraine," Tobias Münch Meier, nuclear expert at Greenpeace, told DW.

But at the moment, it is difficult to get the G7 governments to concentrate on Chernobyl, in the face of new major crises such as the Ebola epidemic in Africa and the wars in Syria and Ukraine.