Fundamentalist Christian Group Gets School of Their Own | Germany | News and in-depth reporting from Berlin and beyond | DW | 31.08.2006

A group of fundamentalist Christians in Bavaria has won a long battle for the right to privately teach their children -- without sex ed and lessons on evolution. Bavarian officials are calling it an "emergency solution." 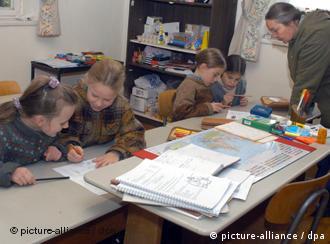 Homeschooling is illegal in Germany, and yet the members of the fundamentalist Christian sect "Zwölf Stämme" (Twelve Tribes) have won a victory of sorts in their fight to educate their children outside of Germany's state school system.

Bavarian officials have agreed to let the group's 32 school-aged children be taught by their own teachers in a private school -- albeit one that is subject to state controls. The school has initially been limited to a timeframe of one year.

With the creation of the private school, a "years-long illegal situation has been ended," said Stefan Rössle, district administrator for the region of Donauwörth in Bavaria.

Long battle with the law

Because of their religious convictions, parents in the Twelve Tribes community had been battling with state officials for over four years to keep their children out of state schools. Twelve Tribes members take the Bible's teachings literally, and prefer to shield their children from some aspects of the modern world. In homeschooling, for example, they teach the creation story, not the theory of evolution.

But because homeschooling is not allowed in Germany, the Twelve Tribes parents paid a high price for their resistance to state education. Over the years, they've amassed some 130,000 euros ($167,000) in unpaid fines, watched their children be forcibly enrolled in state schools, and stood by as one father was imprisoned for two weeks for his resistance. Through it all, they refused to bow to the law. 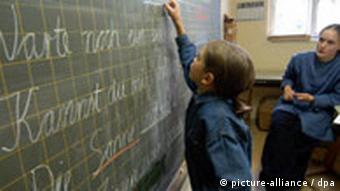 The creation of the private school was an "emergency solution," state officials said

The result is a compromise solution. The Bavarian Ministry of Educational and Cultural Affairs has approved a curriculum for the group's new private school in which sex education is absent, but where ethics, rather than religion, will be taught. The parents can choose the teachers, but they have to foot the bill for the school themselves.

"For us, the compromise was mainly about protecting the children's right to an education," said a ministry spokesperson.

Unlike homeschooling, the school will still be subject to state supervision. State school officials have the right to visit the school at anytime and check on how lessons are being taught.

"We will keep a very watchful eye on the project," said Rössle.

Green party politicians in the Bavarian state parliament have criticized the compromise, saying the state is not acting in the children's interest when it allows a "questionable religious community" the freedom to educate outside the state system.

This latest example in Bavaria highlights the difficult position state authorities are in when parents simply refuse to obey the law. In recent months, there have been several incidents of homeschooling families clashing with truancy officials, mostly for religious reasons. Their case histories are documented by several homeschooling initiatives in Germany which are lobbying for greater educational freedom.

Catholic and Protestant pupils in Germany learn about their faiths in special religion classes at school. Muslim kids, however, are still waiting for lessons in Islam.(Jan. 3, 2006)

Opting to teach your kids at home instead of sending them to school is not an easy decision. In Germany, homeschooling is even illegal. But around 200 parents here do it anyway. (Dec. 28, 2004)

The German Association of College Prep School Teachers says that the number of Scientology groups that operate tutoring centers has tripled in the past 10 years. They worry that children are at risk. (July 28, 2006)