Living Room Lessons Not Easy in Germany | Germany| News and in-depth reporting from Berlin and beyond | DW | 25.12.2004

Opting to teach your kids at home instead of sending them to school is not an easy decision. In Germany, homeschooling is even illegal. But around 200 parents here do it anyway. 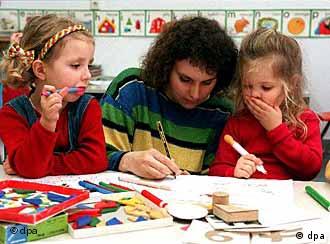 Mom now doubles up as teacher

Dorothee Becker has lost all faith in the German school system. None of her four children go to public or private schools. The values that Becker wants them to learn just aren't taken seriously in educational institutions, she says. Becker is also opposed to grades. "The pressure is so enormous that it's no longer important what the child can do," she said.

After eight years in the Philippines, the Becker family returned to Germany, looking forward to the familiar environment and language and German schools. But after six months of trying desperately to get used to their new classes, the children were exhausted. It was difficult for them to integrate into the new class.

"Although the teachers took pains to help, the children experienced socialization in the school very negatively. When, for example, our oldest didn't know a German word, everyone laughed and turned around and ran off," Becker explained.

One after another, the children fell ill. Becker put it down to the pressure and frustration of school. Finally, she collected books and lessons plans and decided to take charge of the children's education herself. And the Beckers informed the head of the school that their kids would no longer be attending classes. "He said, 'I understand you, I won't make any problems for you'," Becker recalled. 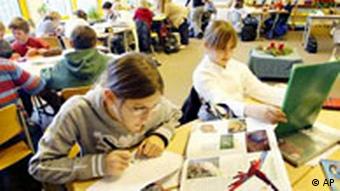 But there was a problem. Whereas in other European countries, such as Denmark and France, children are required merely to acquire a certain body of knowledge, in Germany they must physically attend school. The only exceptions are children who are ill and confined to a hospital for a long period or who hail from families who are part of a circus.

A truancy officer notified the Beckers that he would have the children picked up and escorted to school if needed. "But my husband said, 'There are four children, so you need four policemen who will stay outside the four classroom doors'," Becker explained.

Looking the other way

Becker and another estimated 200 families who have taken the radical step to homeschool their kids inhabit a legal gray area. What they do is illegal, but the local authorities turn a blind eye -- especially when they see that parents are devoted to teaching their children.

Although the Becker kids, aged 11 to 18, are homeschooled, they can still earn accepted school degrees. Two of them have already done so thanks to lots of hard work at home.

Experts say that kids who don't go to school aren't socially-adjusted and lack assertiveness and the ability to deal with conflicts. But, Becker sees the positive aspects.

"They have the freedom to learn," she said. "They don't experience learning as something restrictive, as a constraint that you want to escape from as quickly as possible."

A unique project in Germany brings together high school students and young prisoners for common art lessons. Both sides profit from the meetings. (Dec. 13, 2004)

It's more bad news for the German education system. After schools scored poorly on the second PISA study, a separate report on Germany's kindergartens found that early childhood education ranks low on the priority list. (Dec. 1, 2004)

Germany once again did poorly on an international education study, according to a leaked report, but politicians are saying new education standards passed in 2002 need time to effect change. (Nov. 22, 2004)