There have been reports of another airstrike in the Syrian town of Kobani, carried out by a US-led international coalition. The "Islamic State" group appears to control parts of the town after a three-week push. 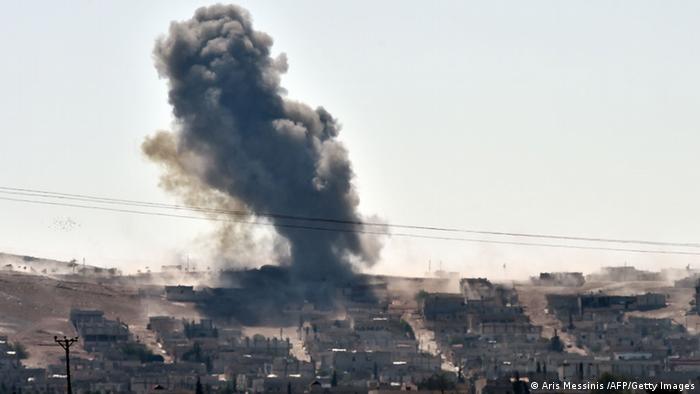 Kurdish officials said on Wednesday there'd been fresh airstrikes near Kobani, a Kurdish town near the Syrian-Turkish border that has come under international attention following a push by the "Islamic State" (IS) militant group to seize it. Their advance has forced over 180,000 residents to flee into Turkey.

An AFP correspondent inside the Turkish border reported one strike on Kobani's outskirts, sending thick black smoke into the air from a hill on the town's eastern side.

Eastern and southwestern parts of the town were already believed to be controlled by the militant group by Wednesday morning, but one local authority said the strike efforts had pushed the group back.

"They are now outside the entrances of the city of Kobani. The shelling and bombardment was very effective and as a result of it, IS have been pushed from many positions," said Idris Nassan, the deputy foreign minister of self-proclaimed Kobane autonomous canton, speaking to Reuters.

"This is the biggest retreat since their entry into the city and we can consider this as the beginning of the countdown of their retreat from the area," he said.

"Islamic State" hoisted its black flag on the eastern edge of Kobani on Monday. The US, which has been launching airstrikes aimed at stopping the militants' advance, said it was "very concerned" for Kurdish civilians still inside the town.

The group has been accused of carrying out widespread atrocities in the areas of Iraq and Syria that it has taken over, including mass executions, abductions, torture and forcing women into slavery. Ethnic and religious minorities have been targeted in particular.

Meanwhile, defense officials in Baghdad said IS militants used a shoulder-fired missile to down an Iraqi military helicopter near the town of Beiji, home to the country's largest oil refinery, located about 200 kilometers (130 miles) north of Baghdad. The two pilots on board were killed.

It is the second Iraq military helicopter shot down over Beiji by the IS in one week.