French rooster in court for crowing too loudly

Meet Maurice, the rooster whose early morning crowing has divided French opinion. His fans, including a chicken called Pompadour and a rooster called Jean-Rene, showed their support outside the court as his trial began. 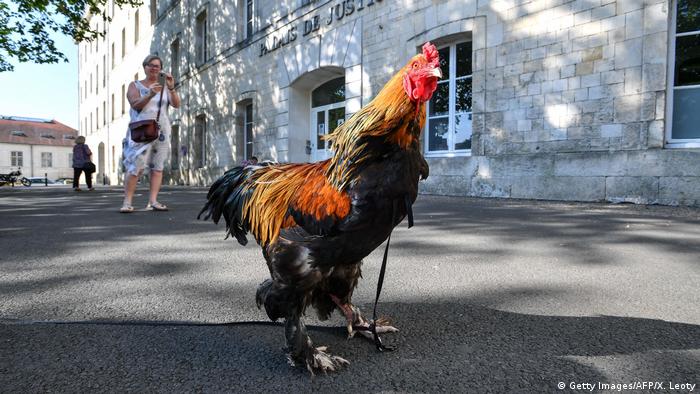 Maurice, a cockerel who ruffled his neighbors' feathers, is on trial on the French island of Oleron over claims that he has been crowing too loudly during early morning hours, French media have reported.

The plaintiffs, a retired couple who own a holiday home on the island, complained that his raucous calls woke them every morning, according to Le Figaro.

Oleron is located off the western coast of France, near the city of Bordeaux.

Maurice and his accusers were not present as the case was discussed on Thursday. Outside the court, a chicken called Pompadour and a giant Brahma rooster called Jean-Rene showed their support for him, AFP reported.

Maurice's owner, Corinne Fesseau, told the French news agency that she had locked him up at night and tried to block out the sun with egg boxes to stop his crows.

The case has been touted as the latest flash point in a conflict between urban and rural France. Defense lawyer Julien Papineau reportedly told the court that "out of 40 neighbors, there are only two who are bothered by it!"

The mayor of the nearby town of Gajac, Bruno Dionis du Sejour, told AFP that this was a battle between "bobos," or bourgeois bohemians, and countryfolk.

He wrote an open letter in May to defend the right of church bells to ring, cows to moo, and donkeys to bray throughout rural France.

"When I go into town, I don't ask them to remove the traffic lights and cars," he said. He added that he had asked the French government to declare rural sounds a part of French heritage.

In November, Maurice appeared on his own Facebook page dressed in a yellow vest, in support of the anti-government "yellow vest" protests that swept through the country late last year.

The court is scheduled to hand down a verdict on Maurice's case on 5 September.