France's far-right National Front (FN) won a victory in a local by-election. Nonna Mayer, Research Director at the National Research Centre in Paris, spoke to DW about the ramifications. 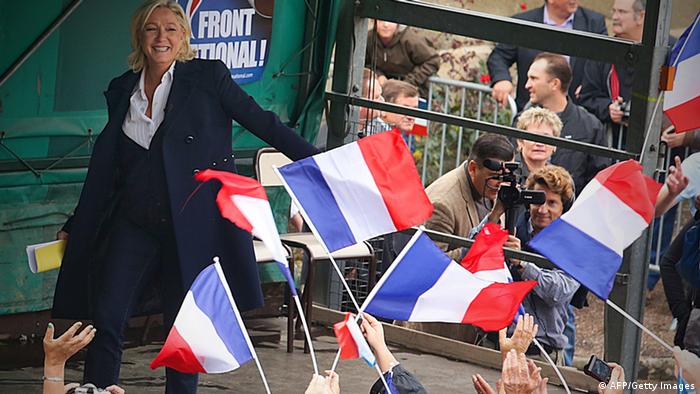 DW: Mainstream political parties in France had a wake-up call on Sunday when the euro-skeptic and anti-immigration National Front won a minor election in the south of the country. What does this mean for France?

Nonna Mayer: National Front voters are more mobilized than all the others. The left-wing voters are demobilized because they are unhappy with the policies of the Socialist government, and the right is divided. That's a very good context for Marine Le Pen. Many people predicted a victory. It's the third time the voters there have been re-voting, and one must admit that in all the last by-elections, the National Front has got good scores - the popularity of Marine Le Pen is higher than her father's ever was.

The context is good for her: the economic recession, the fear of what's going on in the world, fear of radical Islamism, a growing feeling of insecurity in France fed by many very spectacular burglaries and rifle shots in Marseille. All that is good for her because, usually, when a government is in office, after a few months, the voters are disappointed and they turn to the opposition. In the last survey I saw, Marine Le Pen is presented as the best opposition to Francois Hollande because the left and the right have been in office, they have even governed together, and found no solution to the crisis. So Marine Le Pen says: try me, try us.

Are people voting for the National Front not only because they agree with its policies but also as a protest vote against the policies of President Hollande?

They are blaming Hollande, and there's an unprecedented discontent and distrust of the whole political class that is good for an anti-system party like the National Front. But voters who vote for the National Front are certainly voting against the government parties. But it's not any kind of voter who votes for Marine Le Pen. They agree with the basic ideas of the National Front - 94 percent of these voters consider there to be too many immigrants in France. Over 80 percent want to restore the death penalty. They are on a kind of ethnocentric, xenophobic and authoritarian trip when they turn to Marine Le Pen.

She took over from her father, Jean-Marie Le Pen. The party has had its ups and downs over the years. How has she learned from past mistakes?

First, she learned that she must rebuild the party. It was totally broken down, but she is building it up again, slowly and patiently. The other mistake: her father was associated with the extreme right of the '30s, with collaboration and the Vichy government in France, he said again and again the Nazi occupation had not been so inhuman. She is a woman born in 1968, she turns her back on World War Two and the battle for French Algeria, another issue for the National Front supporters. She just wants to bring her party into office, but the basic ideas are exactly the same. At the heart of that party, there is what they call "National preference yesterday, national priority today" - it's basically that there is inequality, differentiating between the "real" French and the others. On that issue, they haven't changed.

Next month, she visits The Netherlands to forge closer ties with Geert Wilders, head of a far-right party there. Both have similar policies on immigration and protectionism. Are we seeing the first steps toward the creation of a pan-European far-right grouping, given that elections for the European parliament take place next May?

What's more important for the next elections is the general anti-Europe movement, where you not only have extreme right parties. There is a tide there because of the recession and the austerity policies. Making friends with other radical right-wing parties - her father did it before, but he didn't have the same friends. Geert Wilders has the same ideas but nothing to do with the extreme right of the '30s. He is more respectable in a way than the party of Marine Le Pen. That's where she wants to turn now: to respectable far-right parties that have the same ideas against immigrants, against Islam and against Europe. It's The Netherlands, but it's also the progress parties and the people's parties in the Scandinavian countries, it's the Swiss parties, all these parties that don't have the infamous label of the extreme right going back to World War Two.

Back to Paris: as you pointed out, the Sunday result was undoubtedly a wake-up call for the government. Where does President Hollande head from here?

His idea is that you just go on with the policies he promised and that gradually, unemployment will start to go down and growth will set in. I'm not sure it's enough in a period of fear and uncertainty.

Nonna Mayer is Research Director at the National Research Centre in Paris.

While revelations of French cabinet members holding offshore bank accounts have done nothing to help President Hollande, the real issue is the sputtering French economy - and whether he is capable of improving it. (12.04.2013)

French industrial output has fallen for the second consecutive month, casting doubt on Paris’ claims that the economy is on the road to recovery. Moreover, weak growth has worsened the government’s budget situation. (10.09.2013)