Edouard Philippe said he is ready to withdraw a proposal to raise the retirement age to 64 in a compromise with striking trade unions. The reform has triggered monthlong nationwide protests. 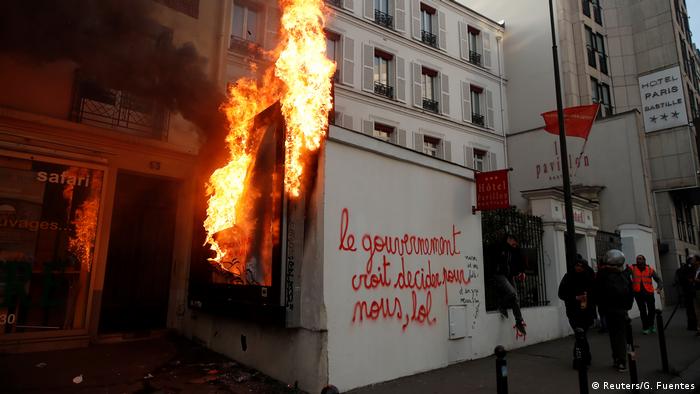 French Prime Minister Edouard Philippe offered a major concession to unions after trade groups took to the streets for a fifth straight day of protests against President Emmanuel Macron's overhaul of the pension system.

The prime minister said in a letter to unions and employers that he was ready to make an offer to unions, on the basis of a compromise, after talks on Friday.

He said he was ready to withdraw his proposal to raise the retirement for full pension benefits by two years to 64, under certain conditions. The new, extended retirement age would have been been implemented from 2027.

"To demonstrate my confidence in the social partners ... I am willing to withdraw from the bill the short-term measure I had proposed."

He delivered the message as thousands of protesters flooded the streets of Paris and other major cities in France. The trade unions and their allies have called on the government to withdraw its plans to raise the standard retirement age, using mass protests that have blocked rail traffic and curbed access to public transportation since December 5.

Through the concession, Philippe is looking quell the ongoing demonstrations and improve ties with moderate trade unions, such as France's Democratic Confederation of Labour (CFDT).

The proposed boost to the retirement age is part of the government's efforts to fuse 42 existing pension schemes into a single, points-based system that trade unions fear will make citizens work for more years, only to receive a smaller pension.

France has said that the proposed "pivot age" would curb rising pension deficits, and save 11 billion euros (US$12.2 billion) by 2026.