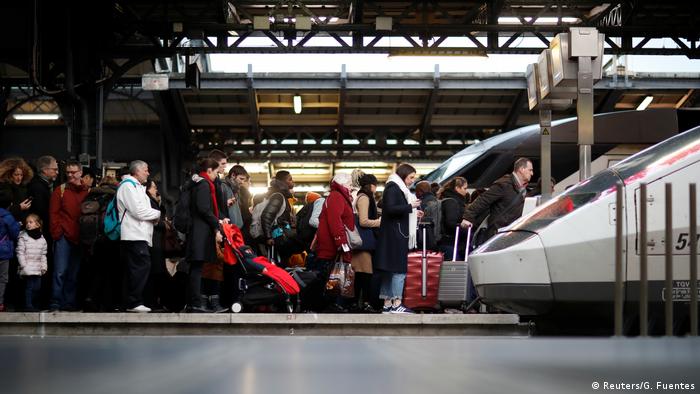 France's transport network remained disrupted in Paris and across the country over the weekend, complicating travel for those returning from Christmas breaks or leaving for the New Year holidays.

The rolling strike action over pension reforms entered its 25th day on Sunday, with local and long-distance public transport workers insisting they will keep up the pressure on the government. Monday was expected to bring a slight improvement.

Deputy Transport Minister Jean-Baptiste Djebbari accused the General Confederation of Labor trade union (CGT) of a "systematic opposition to any reform" on Sunday.

In response, union chief Philippe Martinez said the government had caused the conflict to descend into "chaos." The government and the unions are not due to hold their next talks until January 7.

On Saturday, trade union demonstrators spearheading the action were joined by protesters from the anti-government yellow vest movement in Paris, where clashes broke out and police fired tear gas.

The SNCF train authority said only six of 10 high-speed trains were running on Saturday. While Paris Metro service was improving, six metro lines remained completely closed on Saturday, and there was partial service on several lines that had been shut down since the strikes started in early December.

Why are the strikes taking place?

French President Emmanuel Macron wants to increase the retirement age from 62 to 64 and replace 42 separate pension schemes with a single system.

The government has said it has no plans to concede on the special retirement regimes, but has offered some concessions to most of the sectors involved in the strike.

On Saturday, it was reported that the government offered concessions to striking ballet dancers at the Paris Opera, who appeared in a viral video earlier this week, showing them dancing outside their theater.

Financial daily Les Echos reported that the government proposed the pension reforms should come into force for dancers recruited after January 1, 2022. It also proposed a program to help them transition after their careers.

The special retirement plan for the Paris Opera was introduced in 1698 by King Louis XIV. It allows dancers to retire at age 42.

Prime Minister Edouard Philippe plans to continue negotiations with the unions after the holidays. The unions are planning a major day of action on January 9.

All but two train lines of the Paris metro were shuttered on Christmas day, while only a fraction of high-speed rail and inner city trains were operational. Despite the disruption, a slim majority support the strikes. (25.12.2019)

French travelers heading home for the holidays faced canceled trains and packed roads, as a strike over pension reform showed no signs of easing. Macron urged for a "truce" and for striking workers to act "responsibly." (22.12.2019)