In an uncomfortable Bastille Day interview, the French leader said his barber's salary was not under his purview. Hollande has fashioned himself as a salt-of-the-earth socialist leader. 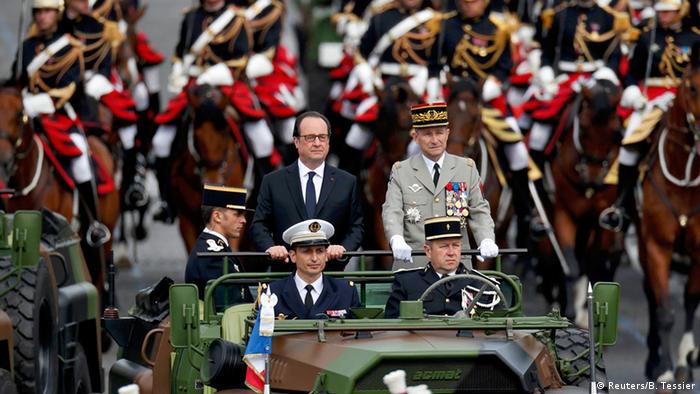 The French president's traditional Bastille Day interview is usually a serious and dignified affair, with the leader of the Republic reflecting on the state of the nation. Deeply unpopular President Francois Hollande did get the chance to announce that France's state of emergency - in place since November's Paris attacks - would not be renewed beyond July 26, saying new security measures imposed in May meant it was no longer necessary.

Before long, though, Hollande was forced to respond to an embarrassing scandal revolving around the exorbitant sum paid to his personal barber.

A report by newspaper Le Canard Enchaine, saying that Hollande spent 10,000 euros ($11,000) on a monthly salary for his in-house hairdresser was confirmed by Hollande's spokseman on Wednesday.

"You can reproach me on anything you like, but not on that," said Hollande, a Socialist who won the presidency in 2012 by running on a platform of being "Monsieur Normal" and a champion of the poor. He is famous for comments such as "I do not like the rich," and has cut the budget of the presidential residence, the Elysee Palace, by 9 million euros - shedding 10 percent of its staff.

He said he was not personally responsible for organizing his own hair styling, and that "we used to use external contractors until now, and I preferred that it was handled from here." The Elysee Palace has explained that having taken the man away from his monthly salaried job, they then offered a commensurate fee for full-time duty.

Hollande became visibly uncomfortable when the subject was broached.

Many of his critics have slammed the amount of public money being spent on grooming the president's mane, particularly when somewhere around 60 euros is considered average for a posh male haircut in Paris.

Hollande was mercilessly mocked on social media, with many questioning why someone with so little hair would need a hairdresser, or suggesting only bad politicians run in the next general election in 2017.

The revelation was also a slap in the face to many of France's workers who have been fighting the governments restrictive new labor laws, leading to crippling strikes across the country.

The symbolism was especially poignant on Bastille Day, when France marks the beginning of the revolution of the poor oppressed classes against the wealthy out-of-touch aristocracy in 1789, resulting in the end of the monarchy and the establishment of the Republic.

He was defended by his ex-partner Valerie Trierweiler, who told the press that Hollande had no idea how much having an in-house hairdresser had cost, and that he was furious when he found out.

Former French President Nicolas Sarkozy has announced he will be stepping down as leader of the Les Republicains party. The move is seen as a precursor to running in presidential election primaries later in the year. (03.07.2016)