The French government has invoked a special constitutional measure to force through a controversial labor bill without a vote. The legislation has sparked widespread protests. 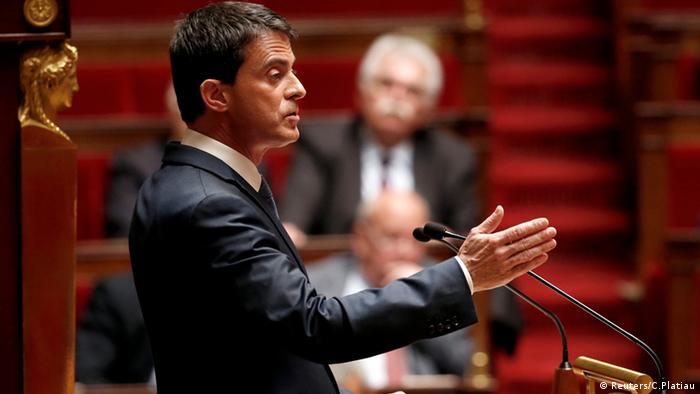 Dozens of French lawmakers booed and stormed out of the lower house's chamber on Tuesday after Prime Minister Manuel Valls announced the government would use Article 49-3 to get the reforms approved.

It is the second time the leadership has invoked the measure, which allows for the adoption of legislation without a vote in parliament - unless the lower house passes a no-confidence motion against the government. Members of parliament have 24 hours to decide whether to take this step.

The divisive bill has led to months of anti-government protests and workers' strikes across the country. Opponents argue the changes will threaten worker protections because they make it easier for employers to hire and fire workers and extend working hours.

The legislation is also facing resistance from within the ruling Socialist party, as well as from the opposition conservatives.

Valls told lawmakers the bill was needed to boost employment and tackle joblessness.

"This country is too used to mass unemployment," Valls told the parliament, saying he was acting in the "general interest" of the French people.

He said more than 800 amendments had been added to the legislation after "a quality debate" but that a "coalition of immobility" had stymied the reform drive aimed at reducing unemployment.

The bill now goes back to the Senate, before returning to the lower house later this month for a final reading.

French police have arrested at least 13 people for "violence and degradation." The CGT labor union's leader said they would continue to fight against labor reform legislation, saying "the struggle is far from over." (14.06.2016)

Thousands have taken to the streets in cities across France to protest a new labor law. The country continues to reel from strikes and protests against the planned legislation, which activists say erodes workers' rights. (02.06.2016)