French for all in Germany's Saarland

Starting in 2043, the German state of Saarland, which borders France, wants to become bilingual by adding French as its second lingua franca. But the plans have met with fierce opposition. 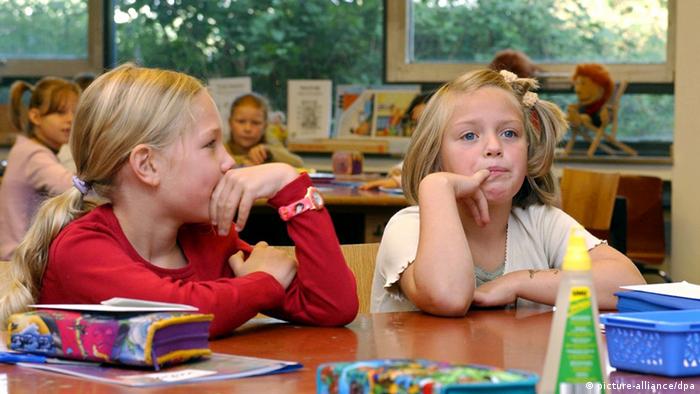 The next generation will be fully bilingual - in French and German - at least that is the plan, dreamt up by SaarlandPremier Annegret Kramp-Karrenbauer. The southwestern German state, which borders France, announced a plan to make French a working language in the state by 2043. If successful, it would make Saarland the only bilingual German state.

"We'd like to see those children born last year or this year are brought up bilingually," Christine Klos, who works for the premier's office, told DW.

She said the state government plans to hire French-speaking nursery teachers for at least half of the state's crèches - or day care centers to work alongside their German colleagues.

Saarland already has daycare centers that teach some French and there are bilingual schools and some offer bilingual diplomas. Although French already has a special place in the state's curriculum, most people in Saarland are not bilingual.

Local councils will have to train staff to work in French as well as German, new recruits may have to be fluent in both languages before taking their positions. 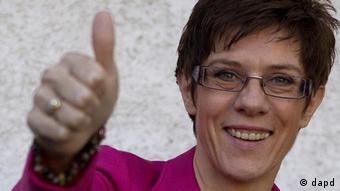 Some 18,000 workers already commute to Saarland from the French border region of Lorraine. The regional government would like to see that number rise significantly. "We want to make use of our position as a gateway between two major economies in an even more efficient and systematic way," Klos said.

The government also hopes to attract more shoppers from across the border. With a bilingual infrastructure in place, it would be easier for retailers to set up shop.

But there is opposition to the plan, as Saarland has a major debt problem and was planning to cut 2,400 municipal jobs. It's not clear yet how much it will cost either, according to Klos.

The government will discuss its plans with residents and relevant institutions before coming up with a final concept. But Klos said, in theory, a French-speaking teacher is not more expensive than a German-speaking teacher.

Frank Baasner, director at the German-French Institute in the southwestern town of Ludwigsburg, predicted a "huge training and administration effort" for Germany's smallest territorial state.

Even if 58 percent of students already take French in Saarland - a figure much higher than the German average of 19 percent - it is not enough to make it a lingua franca, he said, adding: "All the municipal staff will have to learn French - not everyone can do it. I know that from working with many of them." 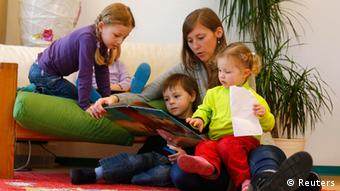 Young people in Saarland are to grow up bilingual

Saarland is not the first German state that has wanted to incorporate French in to daily life. The southwestern state of Baden-Württemberg, which also borders France, had toyed with the idea of making French the first foreign language required for all its students.

But parents were up in arms about the idea, as they preferred English to be taught as the initial foreign language. The idea, however, faded away after the state government lost a court case on the issue

Baasner said he thinks public opinion could again prevent the idea from becoming reality. "We've seen time and again that political pressure and force don't achieve much," he told DW.

He said parents in Saarland will also likely resist the government's plans, despite the state's close history with France. After World War II, Saarland was a French protectorate before a referendum decided it would become a German state in 1957.

Baasner also said he does not see a convincing argument for the change. Unemployment in Lorraine is much higher than in Saarland - so the commuting would probably be mainly in one direction.

In nearby Luxembourg, the economy is booming, but you don't need French to work there, as German is one of Luxembourg's three official languages.

Baasner called the plans for bilingualism purely symbolic. "They [the government] want to reposition Saarland," he said. "It's a political aim."

With just 1 million residents, Saarland is often criticized as being too small to exist in its current form and there are regularly calls for some of Germany's 16 Länder, or states, to merge and cut costs.

"But by introducing a second lingua franca, you could say 'look here, we're special'," Baasner said.

Bilingualism gets a boost at the Kinder-Ecole

Franco-German relations thrive on language acquisition – and the sooner a person starts learning, the easier it is to pick up a new language. In a Parisian kindergarten, teachers take a playful approach to bilingualism. (22.01.2013)

Intercultural libraries aim to help immigrants adapt to life in Germany. The library in Duisburg offers children a wide range of multilingual media, which other interested groups can also use. (16.07.2013)

Diversity the norm in one German classroom

Children who are immigrants or the children of immigrants often need special lessons. In Bonn, some parents reach into their own pockets to make sure kids get the language help they need. (07.06.2013)