France is planning to privatize 178 historical castles and monuments. But regional authorities fear they may get saddled with decrepit and indebted buildings that can't support themselves. 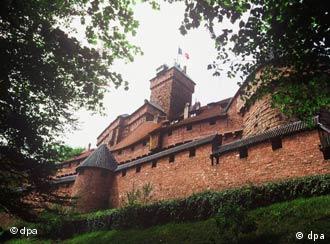 The monastery of Montmajour with its mighty 14th century keep is not far from the city of Arles in southern France. It can be seen from afar and is of great renown. Van Gogh painted it many times. Yet, it doesn't make any money: In 2002, it carried a deficit of €46,000 ($61,000). The amount of debts almost trebled within one year, rising to €131,000 in 2003. Thus, the monastery has become a business of subsidies, which the French government would like to be rid of.

In the course of its decentralization policy, France aims to cede parts of its national cultural heritage to the administrative sovereignty of provinces and local authorities -- for free.

But the Association of French Provinces has complained that the law allowing the transfer was passed without the approval of the affected bodies which fear high maintenance and restoration costs.

It's a "poisoned gift", many local politicians say. Nobody knows whether the state will grant financial support for the monuments' renovation.

The French decentralization law of 2004 says restorations "could be subsidized by the state." But the subjunctive form dominating the phrase is the object of broad disapproval. In the case of the Villa Cavrois, which is situated close to the industrial city of Rubaix in northern France, the relevant local authority of Croix asserted it didn't have the necessary resources for taking over the building. The monument, built by architect modern French designer Robert Mallet-Stevens (1886-1945), is in a state of decay and is currently being renovated by the state.

Altogether, the French government owns 400 historical monuments. "They're trying to foist all the monuments that they don't want anymore to us," Michel Vauzelle, president of the province Provence-Alpes-Cotes d'Azur, complains. Just two years ago, he had been enthusiastic about the idea of making the castles and churches property of the provincial administrations. But in the meantime, he has come to a completely different view of the situation. "This law is going to ruin one of the most important parts of our cultural landscape."

The castle Haut-Koenigsbourg in Alsace is one of the few monuments able to fund its own upkeep. The completely renovated castle attracts 500,000 visitors each year.

"The purchase is part of our policy in favor of castles and ruins of the Vosges (Mountains). We intend to turn the castle Haut-Koenigsbourg into our engine," Philippe Richert, president of the Lower Rhine Regional Council said. But other historical monuments aren't so profitable.

The list of monuments on the block includes Silvacane Abbey, the palace of Jacques Coeur in Bourges and the castle of Chaumont-sur-Loire. In 2000, UNESCO declared the Loire Valley between Sully and Chalonnes part of world cultural heritage in order to preserve the unique natural and cultural landscape there. But the area remains inadequate as a destination for day-trip mass tourism.

The small castles are especially beautiful, but the private owners know from sorrowful experience what it takes to maintain the premises: The Château de Villesavin, for example, has 20,000 guests per year -- not enough to provide the adequate funds for restoration.

As the highly centralized French political system seeks to move influence from Paris to the regions, Strasbourg and the Alsace are emerging as models for the success decentralization can bring. (Oct. 29, 2003)

The eastern German town of Quedlinburg has been a UNESCO World Heritage site since for the past 10 years. The town was lucky: for a time, many of its unique monuments were in danger of being torn down. (Jan. 3, 2005)