Freed from coalition, UK′s Cameron swings to the right | Europe | News and current affairs from around the continent | DW | 18.05.2015

Freed from coalition, UK's Cameron swings to the right

As the first all-Tory cabinet in 20 years settles in, austerity, Scotland, and a renegotiation of the EU relationship are on the agenda. Samira Shackle reports from London. 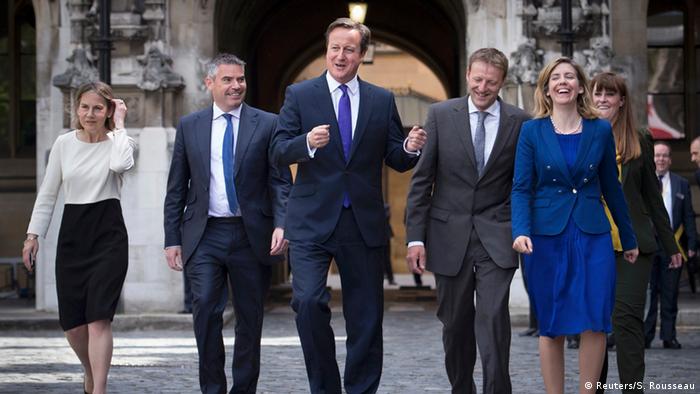 For months, analysts hailed the end of two-party politics in the UK. But the general election on May 7 delivered a result that no one was expecting: an outright majority for the Conservative Party. The margin is small; they hold 331 of the 650 seats in the House of Commons. But that does not change the fact that this is the first time in 20 years that the Tories have unambiguously won a general election.

It appears that David Cameron plans to use this majority to deliver a radical agenda to cut welfare, shrink the size of the state, and redefine Britain's relationship with Europe. Navigating such a small majority will be a challenge; it seems likely that Cameron will move to the right to consolidate support amongst his restive backbench MPs after five years of compromise in coalition with the Liberal Democrats.

The new government has been in place for just a week, but it has been busy reinstating proposals that had been blocked by the Liberal Democrats during the last parliament. The Tories intend to publish plans to scrap the Human Rights Act within their first 100 days, replacing it with a British Bill of Rights. Legal experts suggest that this will be a headache for the government, not least because the Good Friday Agreement that brought peace to Northern Ireland in 1998 depends upon the Act. The Conservatives also plan to bring in the so-called "snoopers charter" which will give police greater powers to monitor Internet communications. The Liberal Democrats had opposed this on civil liberties grounds. Another plan is to give English MPs a veto over legislation only affecting England. 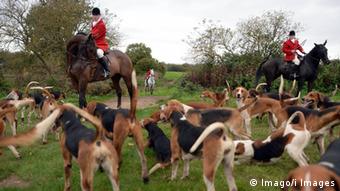 "It's going to be interesting to see whether the Conservatives can deliver the tax cuts they promised," says Ed Rennie, head of virtue at the independent think tank ResPublica. "They can't use the excuse of the Lib Dems anymore. They have promised a great deal, but delivery is going to be based on the extent to which the economic growth stays healthy. There will be serious cuts to welfare."

Backbench Conservative MPs, many of whom dislike Cameron's modernizing agenda, have more clout in this small majority government than they did in the coalition, and this could reopen a historic split in the party. A pledge to hold a free vote on reinstating fox hunting is seen as an attempt by Cameron to soothe these MPs.

At the heart of the Conservative manifesto was a pledge to hold an in/out referendum on Europe by 2017, something which many of these restive backbenchers have lobbied for. Cameron will campaign to stay in the EU, but if the public votes for an exit, he will have to act on it. "UKIP only has one MP, so its voice will be quieter than during the election campaign," says Duncan O'Leary, research director at the think tank Demos. "However, Euroskeptic backbenchers will be powerful because the government will rely on their votes to maintain its small majority in parliament."

Cameron's preference is to renegotiate Britain's relationship with the EU rather than leave altogether. His hope will be that if he can secure changes to the way EU directives are applied, he will quash the voices of the Euroskeptics. But this will be challenging.

"The new European Commission accepts the need to make the bloc more competitive and remove overly burdensome red tape," says Allie Renison, head of EU and trade policy at the business lobby group Institute of Directors. "Other objectives are more contentious, such as amending the commitment to 'ever closer union' in the treaties. Treaty change is a particularly thorny issue as it would require referendums in a number of countries. The prime minister faces several challenges. In Brussels and many national capitals the view is that the troubled situation of the eurozone is the most pressing issue. He must also perform a balancing act with his own party when it comes to managing expectations on renegotiation."

Another major constitutional issue facing Cameron in the next parliament is the state of the union. Following last year's Scottish independence referendum, the Scottish National Party won nearly every seat in Scotland. Cameron has pledged to "bring a United Kingdom together" following the SNP surge. 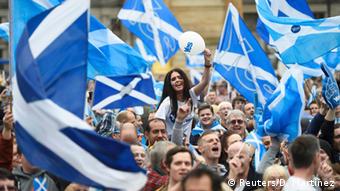 "Power - including more of the power to raise or cut taxes - will be devolved to Scotland as part of a more 'federal' UK," says O'Leary. "No one knows whether this will be enough to keep the union together in the long run. However in the short term, there will only be another referendum on Scottish independence if the UK votes to leave the EU."

Some analysts also suggest that if the SNP sweep the forthcoming elections for the Scottish Parliament, they could push for another referendum. At present, so-called "devo max" for Scotland - full political devolution - which is supported by the majority of the Scottish people, seems to be the most likely option for the government to pursue.

"It'll be interesting to see how the debate plays out within the Conservatives, as there are voices within the party that oppose full political devolution, as well as within Labour and the SNP," says Rennie. "We'd argue that 'devo max' to Scotland would save the union."

UK Finance Minister George Osborne has said his government has been given a clear mandate to renegotiate British EU membership. A referendum is set to take place by the end of 2017, although it could be even sooner. (12.05.2015)

David Cameron is hosting his first Cabinet meeting. The newly re-elected British prime minister is finalizing who will serve in his government after securing the first Conservative majority in nearly 20 years. (12.05.2015)