Far-right presidential candidate Marine Le Pen has accused her centrist rival of being the "candidate of the elite." But Emmanuel Macron hit back in a TV debate, insisting his challenger offered no new policies. 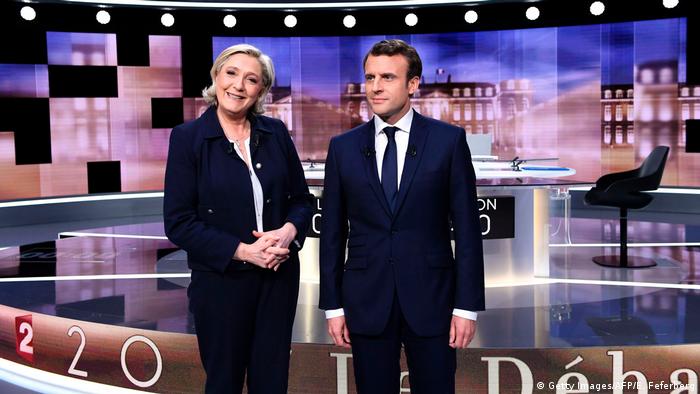 The two rivals for the second round of France's presidential election launched personal insults and attacked each other's manifestos on Wednesday evening as they faced off in the final TV debate ahead of Sunday's vote.

During the high-stakes duel, far-right candidate Marine Le Pen hit out at her centrist opponent Emmanuel Macron's record as a former economy minister, accusing him of playing a key role in selling off several of France's state-led companies.

"That's what you do best, break up companies and do M&A (mergers and acquisitions)," Le Pen told her contender, insisting he had acted against the interests of France.

Instead, Le Pen promised to create a sovereign wealth fund to prevent what she said were foreign "vultures" from taking over French companies.

In response, Macron accused the National Front candidate of misleading voters about his record, of having no experience in economic issues and no workable ideas.

"Your strategy is to tell lots of lies, you don't propose anything," he responded, adding, "You play with fear," in reference to her party's anti-immigration stance.

Macron repeated his vow to lower taxes for workers, and allow self-employed people - who are currently excluded from France's generous unemployment scheme - to benefit, if they go bankrupt.

Le Pen stuck to her main campaign message, telling an estimated 20 million viewers: "I'm the candidate of the people, who protects our jobs, our security, from external competition and from the rise of Islamic fundamentalism." She insisted Macron was the "candidate of the elite." 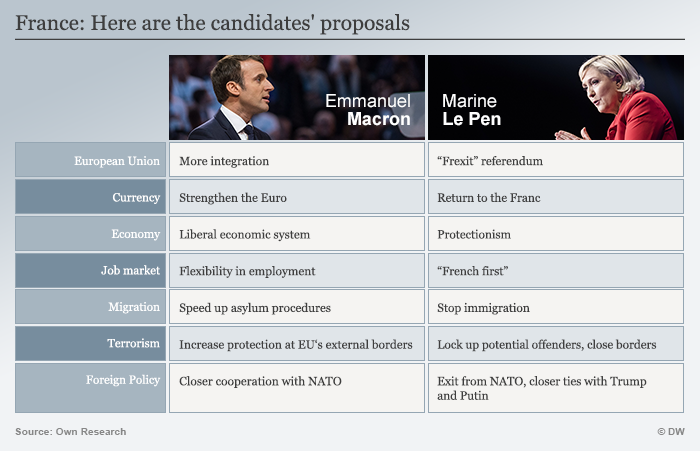 From EU to eurozone

Le Pen said that central banks and businesses could decide whether they wanted to continue to use the euro for payments, but French citizens would have the franc in their wallets. She said it would resemble the system used before the introduction of euro banknotes.

But Macron hit back saying the euro before the introduction of banknotes was used as a reference currency, but payments had been made in national currencies.

The former economy minister said that if France left the eurozone, French citizens would lose up to one-third of their savings since the franc would have to be devalued upon the re-introduction of France's former national currency. Macron added that it would in effect make France less competitive since countries such as Germany would still be using the euro.

Former banker Macron hit out at what he said was Le Pen's negative picture of France's future in a globalized world, saying that voters don't want her "spirit of defeatism." He promised instead to create investment opportunities that would create jobs.

The centrist candidate has promised to carry out sweeping reforms of France's public services, while Le Pen has threatened to pull France out of the euro and hold a referendum on its future membership of the European Union. 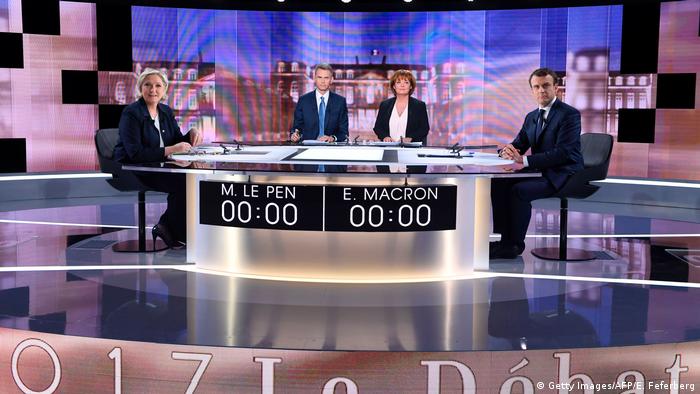 The two contenders even argued over France's contribution to the EU, with Le Pen saying France would save 9 billion euros ($9.8 billion) if it left the bloc, while Macron insisted France's net annual contribution was actually 6 billion euros.

He warned that, like Britain, France may face a divorce bill of 60-80 billion euros if voters decided to withdraw their membership of the EU.

Wednesday's debate was the two rivals' final face-to-face encounter before Sunday's second round vote to pick a replacement for Socialist President Francois Hollande, who is not seeking a second term.

Macron has maintained a 20 percentage point lead over far-right candidate Le Pen, but some analysts believe he may not automatically receive votes from supporters of some of the losing candidates from the first round election.

Many supporters of leftist candidate Jean-Luc Melenchon have vowed to abstain or spoil their ballot.

Since the first round vote on April 23, Le Pen has attempted to soften her image to broaden her appeal to undecided voters. She also temporarily stepped down as leader of the National Front but is still backed by her former party.

Le Pen reaching the run-off has echoes of her father Jean-Marie Le Pen's surprise first round victory in 2002, which pitted him against center-right incumbent Jacques Chirac.

His daughter is likely to win more than the almost 18 percent support he picked up after Chirac refused to face the then National Front leader in a live TV debate.

A Cevipof poll published on the website of Le Monde on Wednesday saw Macron getting 59 percent of votes in the run-off versus 41 percent for Le Pen.

The two candidates have raised the stakes in France's presidential election. They both seek reform, but offer polarizing visions for France's future and its place in the world. DW examines their positions on hot issues. (27.04.2017)

Melenchon refuses to endorse either candidate in French election run-off

France's far-left leader has suggested he will not vote for far-right candidate Marine Le Pen in the French election's run-off. However, he has explicitly refused to endorse Emmanuel Macron. (28.04.2017)