Three members of a rescue boat crew and a fisherman have died after their vessels overturned in heavy seas off the west coast of France. Winds of 120 kph left damage along the Atlantic coast and the storm reached Paris. 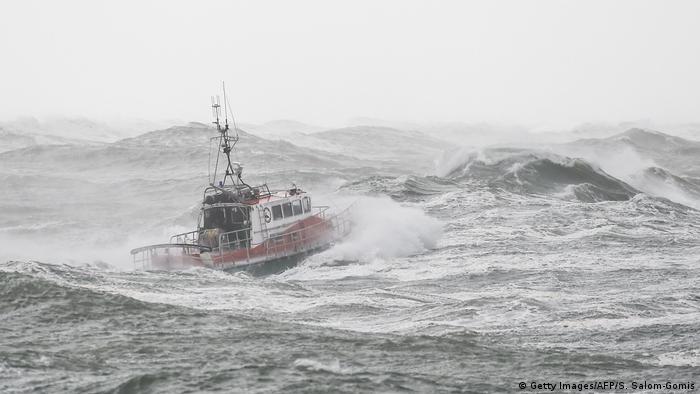 Some 28,000 homes in the west of France were without electricity on Saturday morning as a result of the storm. Train travel was also disrupted.

A man was injured by a lamp post which fell in Paris on Friday evening. The winds and rain interrupted the Grand Slam tennis at Roland Garros on Friday and the FIFA village at the Women's World Cup was closed, together with parks and gardens in the capital.

A lifeboat overturned in rough seas off France Friday, killing three crew members. The unusually strong storm Miguel battered the Atlantic coast with winds of around 120 kilometers per hour (75 mph) on Friday and continued overnight into Saturday.

The search for a missing fishing boat off Sables d'Olonne was called off on Saturday. It is not known how many people were on board, but the owner of the boat has been given up for dead. 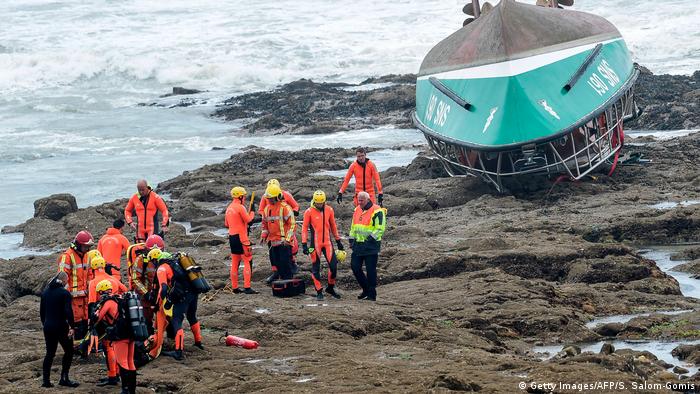 Rescuers work near the capsized boat

Capsized helping a boat in distress

Local authorities said that in late morning Friday "a boat from the SNSM [National Society of Sea Rescue] capsized 800 meters (875 yards) from the coast around Sables d'Olonne with seven people on board." The crew had been attempting to aid a fishing boat in distress in the area. Sables d'Olonne is about 100 kilometers (62 miles) north of La Rochelle.

A community in shock

Yannick Moreau, the mayor of Les Sables d'Olonne, said it was "incomprehensible that any boat went out on a day like today."

"The SNSM boat at Les Sables is a crew of professionals, sailors who know the ocean, know the conditions," he added.

French Interior Minister Christophe Castaner tweeted his respects, saying his thoughts were with the "rescuers, whose comrades helped a ship in trouble. I share their immense sadness."

The rescue boat could be seen crashing through heavy seas as it sought to reach the fishing boat, and it was thrown onto the rocky coast after it capsized.

Parts of Germany have come to a standstill after storms and torrential rain, especially in the south. One person died and daily life has been disrupted. The worst weather appears to be over, for now. (21.05.2019)