A mummified Maori head which was kept in a museum in Normandy has begun the long journey back to New Zealand. A Maori ceremony has been held to welcome the return of the head after 136 years in France. 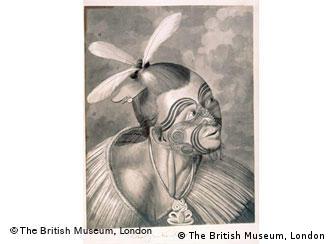 Demand for tattooed heads put an end to the Maori practise

After decades in a Normandy museum, the French authorities finally set about returning a mummified, tattooed head of a New Zealand Maori on Monday, ending years of political struggle.

Maori elders attended an elaborate ceremony at the town hall in Rouen, in northern France, to sign the restitution agreement. In celebration, they sang songs of thanks and performed rituals to honor the returning warrior, before rubbing noses with the town mayor in a traditional Maori greeting.

"The eyes of the world are on us this morning," said Herekiekie Herewini, head of restitution at the Te Papa Museum of Wellington, New Zealand.

It's been 136 years since Europeans first brought the head back from New Zealand and exhibited it in the Rouen Museum as an exotic curiosity.

Maori warriors would tattoo their heads as a display of rank. The heads of those killed in battle would then be displayed until the Maori believed the soul of the dead man had departed.

How the head came to be in the museum in France is uncertain. The only details known are that it was given to the museum in 1875 by a "Mr. Drouet" of Paris.

A four-year political struggle over the fate of the exhibit was brought to an end last year after the French Senate passed a law sanctioning the return of all Maori human heads.

The Ministry of Culture had previously forbidden the return of the head after the Rouen Museum tried to hand it back in 2007.

It is thought that between 12-15 heads were brought to France and exhibited. In the 18th century, European explorers began a practice of collecting and trading the artifacts and there are numerous documented cases of slaves being specifically killed for their heads.

The first recorded case of a European bringing back a human head was in 1770 when the head of a 14-year-old boy was taken by a member of Captain James Cook's expedition. It is thought he was killed just for his head.

New Zealand demanded the return of all the relics from across Europe in the 1980s. Since then, a total of 320 have been sent back.

A ceremony is planned in New Zealand on May 12 to welcome the return of the artifact.

Berlin's restitution of a 3,500-year-old sphinx highlights the tensions that often go along with housing cultural goods. Turkey has threatened a ban on German archaeologists if the sculpture isn't promptly returned. (10.03.2011)

Forty-six countries have vowed to increase efforts to return art and property stolen from Jews during the Holocaust. Delegates are to sign a non-binding declaration in the Czech Republic on Tuesday. (30.06.2009)