France: President Macron announces end of Sahel military operation | News and current affairs from Germany and around the world | DW | 10.06.2021

French President Emmanuel Macron has announced the end of Operation Barkhane, an offensive against Islamist insurgents in West Africa's Sahel region that was launched in 2013. 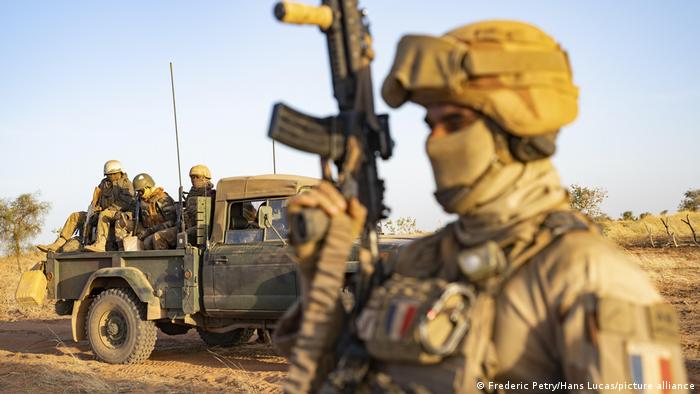 French President Emmanuel Macron on Thursday said he was ending France's eight-year operation in the Sahel region of Africa, particularly in Mali, where the country's military has been waging a battle against Islamist insurgents.

At a press conference in Paris ahead of tomorrow's G7 Summit, President Macron said the Sahel region has become "the epicenter of international terrorism" in recent years, but said that France could not maintain a "constant" presence there.

"We cannot secure certain areas because some states simply refuse to assume their duties. Otherwise, it is an endless task," he said.

Macron added that the "long-term presence" of French troops " cannot be substitute" for nation states handling their own affairs.

Any role for the French army would be focused on training and equipping African security forces, Macron said, adding that the timeline is still to be finalized. He gave no further details about possible troop reduction numbers.

"The time has come: the continuation of our commitment in the Sahel will not be in the same way," Macron told reporters, while calling for a "profound transformation" and a new international force to provide security for the region.

France currently has 5,100 soldiers in the Sahel region, which spans half a dozen countries. A flash point is Mali, a former French colony that has seen a second military coup inside nine months.

Why is France in the Sahel?

France deployed soldiers to the region in 2013 in a bid to stop jihadists carving out a foothold there.

Yet their presence has failed to halt the wave of deadly attacks as the French government has struggled to convince their Western allies to contribute more troops.

Germany has 450 troops in Mali on a training mission, and last year, extended the mission to 2021.

A joint anti-terror force made up of Burkina Faso, Chad, Mali, Mauritania and Niger remains plagued by a lack of equipment, funds and training.

As many as 50 French soldiers have died during the eight-year mission, prompting calls from some opposition lawmakers to bring it to an end.

Macron's announcement could see the issue debated at the forthcoming G7 Summit, as well as meeting of the NATO military alliance in Brussels on Monday.

The Sahel is seen by many Western politicians and experts as a major risk because of the growing strength of militants there.

It is also seen as a crossroads for arms and people-smuggling.

What has happened in Mali?

Colonel Assimi Goita has been behind two coup d'etats in Mali, ousting a democratically-elected president last year and the transitional leadership.

He was sworn in as interim president before naming his new premier on Monday.

Goita has ignored calls from the international community to return power to the country's deposed civilian government.

He has pledged earlier to hold elections in February next year, but it is unclear what role he and other military figures will play in governing Mali after that.

Two regional blocs, ECOWAS and the African Union, decided last week to suspend Mali both organizations over the junta.

Macron had warned last month that he could pull back the French military if civilian rule was not restored to the West African nation.