The French and Dutch finance ministers have met amid tensions over the Netherlands' move to increase its stake in the airline. The share purchase had sparked concerns of a tug of war between the two governments. 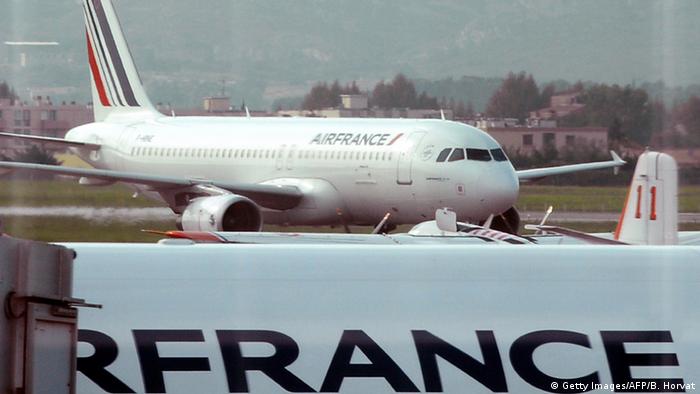 The finance ministers of France and the Netherlands met in Paris on Friday in an effort to ease tensions after the Dutch government disclosed it had been secretly increasing its stake in the Air France-KLM airline alliance.

The two agreed to set up a working group comprising officials from both countries, to put forward proposals by the end of June.

Air France-KLM shares plunged nearly 15 percent after the Dutch government announced on Tuesday it had amassed a 14 percent stake in the airline, almost matching the French government's 14.3 percent holding. Investors feared that the move could start a political tug of war that risked derailing the airline's restructuring efforts.

The announcement prompted French President Emmanuel Macron to call on the Dutch government to explain why it had been secretly raising its stake in the airline.

Shares in the alliance recovered a little after the ministerial talks and were trading up 5 percent in Paris.

Le Maire described the discussions as "frank and clear," and said the two countries would work together "to improve the competitiveness of the group Air France-KLM and to make Air France-KLM a big success."

Hoekstra said the Dutch government's move to increase its stake in the alliance displayed its commitment to the business.

"I'm aware our stake acquisition is not very orthodox, but it is based on good intentions," Hoekstra told reporters.

Earlier in the week, Hoekstra had said the move was a "fundamental step toward protecting Dutch interests."

The Dutch government is said to have ordered the covert share purchase after Air France-KLM's new chief executive, Ben Smith, appeared to ignore its concerns about his plan for closer integration between the Air France and KLM operations.

The Netherlands fears that many KLM flights may be transferred to Paris as part of the integration process, which would undermine Schiphol's role as an airline hub.

Air France and KLM, which have maintained separate corporate structures and boards, and enjoy a high degree of management autonomy, have shared an uneasy relationship since their merger in 2004.

Earlier this year, tensions escalated over suggestions that the alliance's boss, Smith, might replace KLM's long-serving chief executive, Pieter Elbers. The move was thwarted by KLM employees and stakeholders, who lobbied for Elbers to remain.

KLM bosses have also been critical of the alliance for what they perceive as its bias towards the French brand. They say business decisions in the group are made based on what's good for Air France and not KLM, despite the Dutch carrier making more money.

In 2018, KLM made operating earnings of €1.07 billion ($1.2 billion), against Air France's €266 million. The French carrier's performance has been hit by union strikes in recent years.

The French government has raised the pressure on Air France managers and unions, saying the state won't come to the carrier’s rescue as it grapples with worker strikes and a leadership vacuum. (07.05.2018)