France moves closer to a ban on full-face veils | Europe | News and current affairs from around the continent | DW | 11.05.2010

France moves closer to a ban on full-face veils

The French parliament unanimously passed a resolution which condemns the full-face veil known as a burqa on Tuesday. The measure could set the stage for a total ban. 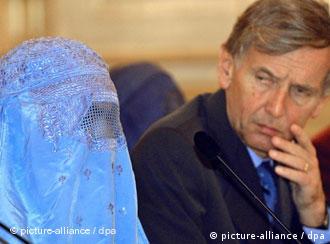 Only about 2,000 women in France wear burqas

The French parliament unanimously approved a resolution that would declare the full facial veil known as a burqa as an affront to French values, paving the way for a full-fledged ban on the garment worn by a small minority of French Muslim women.

The proposals also condemn the wearing of the niqab, a veil that covers the face but allows a slit for the eyes, in contrast to the burqa, in which the eyes are covered by a layer of netting or lace.

The resolution had the backing of both French President Nicolas Sarkozy's UMP party and the opposition Socialists. It passed with a vote of 434 to 0 in the 577-seat National Assembly. About 30 members of the Communist Party walked out before the vote in protest.

The non-binding resolution passed on Tuesday declares that "radical practices which violate the dignity and equality between men and women, such as the wearing of the full veil, are contrary to the values of the republic."

The parliament is to discuss draft legislation that would actually ban the attire next week. It is expected to be put to a vote in July.

The draft legislation would criminalize the wearing of the veil in public, including at institutions like schools or government offices, as well as on the streets. It would also apply to tourists from outside of France.

Under the draft law, women who wear veils covering the face could face fines. Men found guilty of forcing their wives or daughters to wear it could face prison sentences. But the bill has less support from French lawmakers, including Socialist Party leader Martine Aubry, than the resolution.

Aubry said a complete ban would not be feasible, and "risks being a source of stigmatization and mostly [being] inefficient because it cannot be implemented." 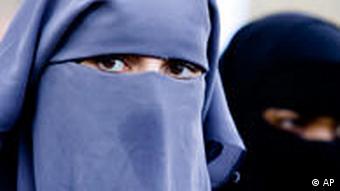 The niqab, which allows the eyes to be seen, is also covered under the proposals

The movement to ban the wearing of face-covering veils in public has drawn criticism from both a French government body which promotes interreligious dialogue and the Council of Europe.

"We do not want Islam to be stigmatized as a result of this law banning the full veil," Mohamed Moussaoui, who heads the Council of the Muslim Faith, told news agency AFP on Tuesday. "Rather than enacting a law barring women from expressing their malaise, we should think about what prompted them to want to cover themselves."

The Council of Europe, a 47-nation body which oversees and promotes human rights in Europe, is to discuss burqas and similar coverings at its plenary meeting in June.

A statement isssued by the council on Tuesday acknowledged that the veil is often seen as "a symbol of the subjugation of women to men," but that a blanket ban would deny the right to religious freedom for women "who genuinely and freely desire" to wear it.

If the bill becomes law, France would be the second country in Europe after Belgium to prohibit the wearing of the full veil in public.

According to the French Interior Ministry's estimates, fewer than 2,000 women in France wear the burqa.

What is it like to live as a woman who covers her face with a veil in Germany? A Deutsche Welle reporter tried it out for a day and reported on the reactions she received. (11.05.2010)

A woman in Italy has received a hefty fine for wearing an Islamic face veil. Italian law prohits covering one's face in public. (04.05.2010)