France investigates mass-landing of immigrants in Corsica | Europe | News and current affairs from around the continent | DW | 23.01.2010

After 124 undocumented immigrants landed on the French island of Corsica on Friday, France says it is now investigating the incident and searching for the traffickers who dropped them off. 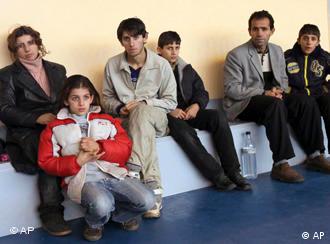 France has launched an investigation into the arrival of 124 undocumented immigrants on the French Mediterranean island of Corsica and has called for a European summit on immigration.

Immigration Minister Eric Besson said France could not allow Corsica to become yet another point of entry for illegal immigrants into Europe.

"This event shows once again how it is of the utmost importance for the European Union to strengthen surveillance along its borders," he said. "We cannot let the Mediterranean fall into the hands of human traffickers."

Besson added that EU immigration ministers should hold a crisis meeting to introduce "emergency measures to strengthen controls" along the Mediterranean coast.

Fifty-seven men, 29 women – five pregnant – and 38 children were dropped off by a boat near the southern town of Bonifacio on Friday, officials said.

The boat reportedly then took off, suggesting it was driven by traffickers. French authorities say they are cooperating with Italian coastguards to locate the boat drivers. 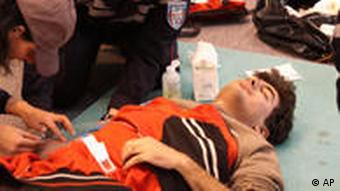 Authorities originally housed the group in a nearby gymnasium, but have since begun to transfer them to detention centers in mainland France.

The Immigration Ministry said they would assess each migrant's case individually, and that each "will get an interpreter, a medical check-up, information on aid in case of voluntary return and legal help."

The incident was the largest known mass-landing of immigrants on Corsica. Such landings are not uncommon on Italian islands further south, but it is unusual for illegal immigrants to enter Europe through French territory.

France exceeds deportation targets by expelling 29,000 in past year

France has exceeded its own targets in the deportation of illegal immigrants. Paris says that in order to be fair to new French citizens, it must be firm with those who do not follow the rules. (07.01.2010)

The European Union's external border security agency Frontex says its sea patrols have successfully reduced illegal immigration into Europe. But the drop is probably also down to the recession. (28.10.2009)

German aid workers are on trial in Sicily for rescuing African refugees after their boat sank in the Mediterranean five years ago. The trial has raised questions about how Europe deals with illegal immigration. (03.10.2009)