France deploys aircraft carrier to Persian Gulf in fight against 'IS'

France has bolstered its contribution to the fight against "Islamic State." Its aircraft carrier Charles de Gaulle will now operate from the Persian Gulf, allowing more combat jets to fight alongside the US-coalition. 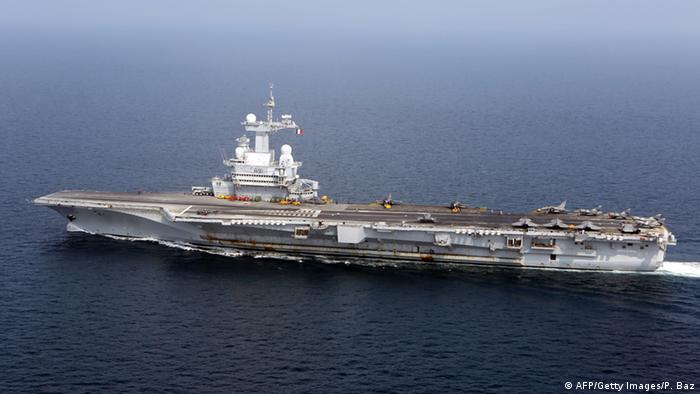 French aircraft carrier Charles de Gaulle was deployed to the Persian Gulf on Monday as part of French efforts against the terror group "Islamic State."

"The integration of the Charles de Gaulle in the operation…begins this morning," a member of Defense Minister Jean-Yves Le Drian's staff told reporters.

France has provided air support to the US-led coalition's operations against "IS" in Iraq since mid-September. It has six Mirage fighter jets currently operating from Jordan, as well as aircraft based in the United Arab Emirates.

With the addition of the aircraft carrier, an additional 21 French combat jets will take part in the international airstrikes aimed at providing relief to Kurdish peshmerga fighters as they attempt to drive IS militants out of northern Iraq.

The Charles de Gaulle was reportedly accompanied by a British anti-submarine frigate, a refueling vessel and an additional attack submarine.

France was among the first nations to join the US-coalition. In retaliation, an Algerian group affiliated with IS behead French citizen Herve Groudel in late September. Paris, like other coalition members, additionally faces the overwhelming security threat of deterring the radicalization of French citizens by Islamist extremists.

US state capitals brace for pro-Trump demonstrations 22m ago

Tunisia: Youths clash with police over economic woes 49m ago