The Interior Ministry has described the organization as something akin to "a private militia." Generation Identity has gained prominence in recent years for its attempts to prevent migrants from entering France. 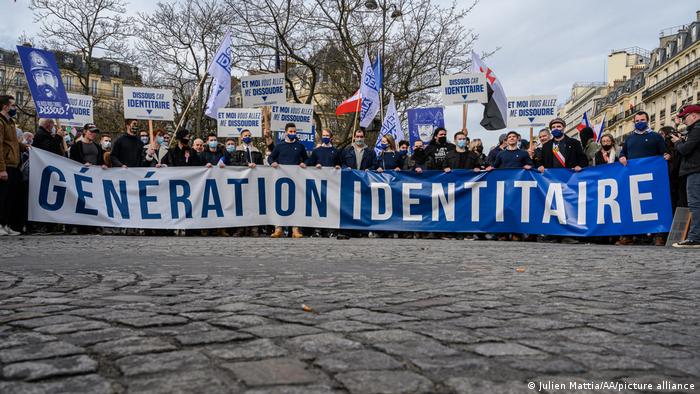 Supporters of Generation Identity have held rallies against the group's dissolution

Interior Minister Gerald Darmanin posted the decree to ban GI on Twitter, saying it took into account the group's "structure and military organization," adding that GI can be regarded "as having the character of a private militia."

Darmanin noted in the decree the group had links to "ultraright groups from which (GI) receives logistical support," noting that it received donations from Brenton Tarrant, the terrorist behind the 2019 mosque shootings in Christchurch, New Zealand.

In the decree, Darmanin pronounced the Lyon-based association illegal, and said its publications and actions spread "an ideology inciting hatred, violence and discrimination of individuals, based on their origin, their race or their religion."

Government spokesman Gabriel Attal said: "With that decision we are putting an end to sometimes violent actions from the group."

GI has gained notoriety in recent years after staging a number of operations to block migrants from entering the country. The most recent of which occurred in January, with around 30 GI members congregating at the Col du Portillon mountain pass on the French-Spanish border, in what the group called a surveillance operation to "defend Europe."

Fences and helicopter missions at borders

It was the latest in a string of demonstrations by GI members, often involving the deployment of fences at border crossings.

In August 2019, the group's leader and two other members were handed six-month prison sentences after they set up a blockade in the French Alps and rented two helicopters to search for migrants.

Members of the far-right group scaled the mountain pass at an altitude of 1,762 meters (5,781 feet), and unveiled a giant banner which said "Closed border: No way" before erecting a symbolic blockade in the snow using plastic fencing.

In response, a separate group of activists escorted some 30 migrants into France, sparking skirmishes with police and GI members.