A Saudi-led coalition has launched airstrikes on rebel-held positions hours after a UN-brokered humanitarian truce was declared. The UN Security Council has urged all parties in the conflict to "exercise restraint." 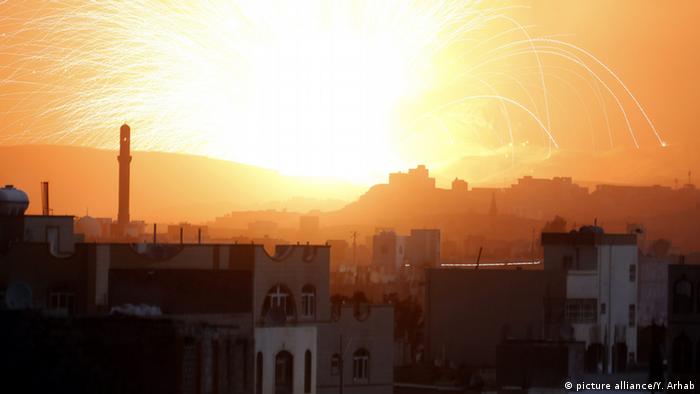 A Saudi-led coalition launched airstrikes on Iranian-allied Houthi targets hours after a humanitarian truce backed by the UN began at midnight on Friday.

The UN declared its highest-level humanitarian emergency in Yemen on July 1, following a military campaign launched by a coalition of Arab countries led by Saudi Arabia in a bid to reinstate the government of President Abed Rabbo Mansour Hadi, exiled in Riyadh.

More than 3,000 people have been killed - including more than 1,000 civilians - since the military campaign against the Houthi rebels began in March.

The UN Security Council urged all parties in the conflict "to exercise restraint in cases of isolated violations and to avoid escalation," adding that "no party should take advantage of the pause to move weapons or seize territory."

The humanitarian truce announced by the UN on Thursday was expected to last until the end of Ramadan in order to allow organizations to make emergency aid deliveries to the country's 21 million people, who are on the brink of famine.

'We don't have big hope in its success'

Houthi leader Abdel-Malek al-Houthi said he did not expect the truce to be successful in a televised speech on Friday.

"We don't have big hope in its success because its success is linked to the commitment of the Saudi regime and its allies," al-Houthi said, referring to the humanitarian truce.

In September, Houthi forces took over large swathes of Yemeni territories, including the capital city of Sanaa.

Yemen's al-Qaeda in the Arabian Peninsula (AQAP), which the US State Department considers the most dangerous branch of the militant group, has taken advantage of the security vacuum since the Saudi-led military campaign began.

According to AP, a suspected US military drone was reported to have killed four AQAP militants en route to Makalla, considered a stronghold for the militant group. The attack follows calls by the group's newest leader for attacks on American soil.