The EU's aim is not to take on more refugees, but to implement better border control. Solidarity with the EU is being pushed to its limits, says DW's Bernd Riegert. 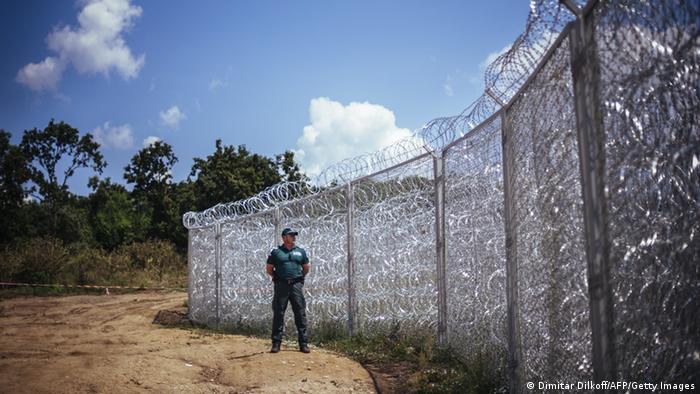 Europe is a fortress and where the fortress has gaps, one way or another they'll be filled. That's something which refugee organizations and many other well-meaning people in the EU continue to criticize. But EU ministers, who are regularly kept busy with the issue of illegal migration, have been saying for a while, at least under their breath, that the large majority of citizens in the 28 states are against the ever larger number of migrants and refugees.

Faced with increasing numbers of migrants crossing the Mediterranean to Lampedusa, coming by train to Rosenheim or camping in Calais at the Eurotunnel, one EU minister - who wishes to remain anonymous - said he couldn't explain to his constituents that the EU is unable to prevent illegal border crossings.

That certainly sums up the current mood, regardless of whether it fits the facts or not. That's why EU interior ministers, as well as the EU Commission, aren't striving to facilitate legal entry to Europe, but instead are focusing on better border management, including the defense of illegal entries on water and land, especially at airports. The fortress of Europe is being strengthened, not weakened - as this has been the case for almost 20 years. 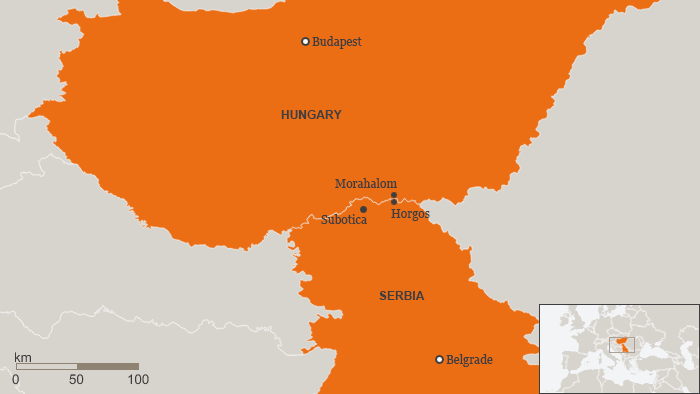 New fences: Hungary wants to stop migrants from crossing the border from Serbia

Following the abolition of border control between most EU countries, the external borders have logically been strengthened. In some cases this is done by means of visible border fences, for example in Spain, Greece, Bulgaria and, most recently, Hungary.

Borders are mainly controlled, however, by general electronic "entry and exit" control, the detection of all travelers with visas and identification procedures of all asylum seekers. Over the past decade, the EU has also brought two new controls into action - in Warsaw, the border protection agency Frontex and in Malta, the asylum authority EASO.

Information about those arriving and leaving is collected together in large databases alongside the fingerprints and biometric data of visa holders and asylum seekers. More and more frequently, this data is being correlated with other databases, often linked to criminals or terrorist suspects. Multiple applications for asylum and forged passports or visas are also more easily discovered. European-trained border guards also receive thermal imaging cameras and access to satellite reconnaissance. That, too, is part of the desired fortress mentality. 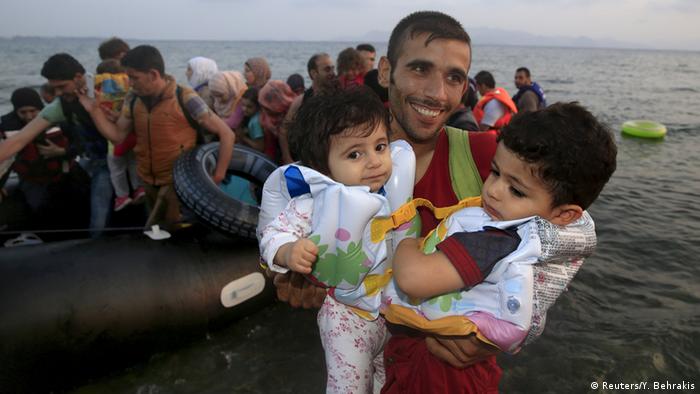 Initially relieved, migrants land on the Greek island of Kos

Unrest within the castle

And yet the systems still aren't fully functional. Some European states are undermining the envisaged operation. Greece, Italy or Hungary, for example, are either unwilling or unable to detect illegal migrants or properly register asylum seekers. Instead, migrants traveling from the southern countries travel on to Germany, France, Great Britain or Sweden.

Inside the fortress, this has lead to growing anxiety. In Germany, the number of migrants and refugees has risen enormously, as German Interior Minister Thomas de Maiziere has repeatedly complained.

The response is clear: Many states who are receiving the majority of immigrants want to change the rules. Instead of requiring migrants to remain in their country of arrival, a quota or distribution system would ensure that all 28 EU countries receive a fair share of migrants, who are deemed either as economically motivated migrants or war refugees.

The existing system, which is named after the Irish capital Dublin, is to be replaced by something new. The "Dublin rule" was invented 25 years ago in order to relocate the security of the fortress to the external borders. The whole thing goes back to the German concept of "safe third countries," from which a state must not take in any asylum seekers. 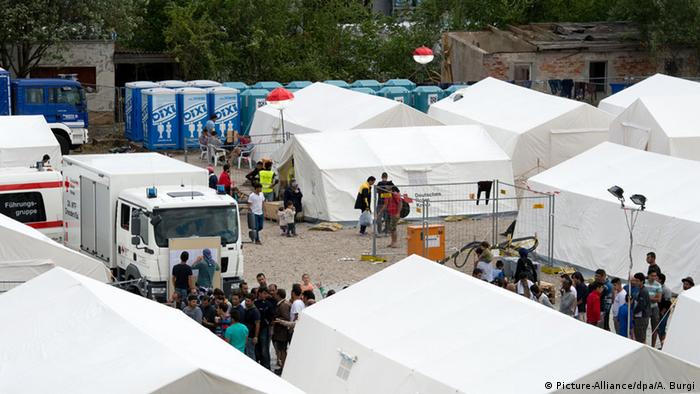 Tent towns for refugees in the eastern German city of Dresden

The numbers of migrants in the Mediterranean has become so high that the system is under threat of collapse. Over the past 20 years, the EU has pushing border security onto its outposts - the so-called transit countries. There was an agreement with Libya which, from the perspective of Europeans, successfully cut off the escape route from Africa. Since the fall of Libyan dictator Moammar Gadhafi, however, the system no longer works. In Morocco on the other hand, the scheme continues to prevent migrants from reaching Spain, which was previously heavily inundated with asylum seekers.

Negotiations with Turkey, through which the main route for migrants runs, have been underway for years, but so far without resounding success. As a result, Greece and Bulgaria have built fences to seal off their borders to Turkey. The effect, however, is that migrants, now larger in numbers, are trying to reach Greece by sea instead of land. Many also board EU-bound planes in Istanbul.

Migration researchers and the High Commissioner for Refugees of the United Nations (UN) have warned that migrant movement isn't reduced by fortification, but only diverted; something which has long been recognized by the European Union.

In its annual "risk analysis" border protection agency Frontex said the number of people who want to come to Europe in the coming years will indeed come and will continue to increase. According to Frontex, the reasons for people fleeing their home country - for example, the war in Syria, the dictatorship in Eritrea, poverty in many parts of Africa or the lack of prospects in Kosovo - will also remain.

EU interior ministers have repeatedly ignored these forecasts. They have focused on building fortress, instead of preparing for the intake of more people. The situation in Calais or on the Greek island of Kos or even the migrant camps in German cities cannot be explained any other way. It's time for those within the fortress, to provide for those arriving. 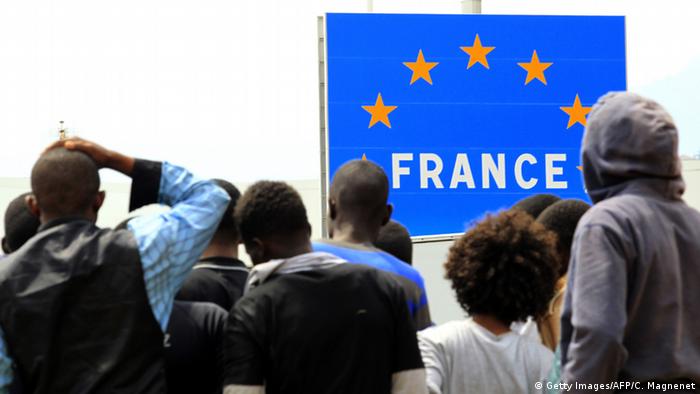 Back to small fortresses and internal borders?

And in future? Immigration policy, asylum grants and the reception of refugees will remain in the sovereign powers of the member states. Everyone will make sure that they taken in as few migrants as possible. The discord between states, however, will increase. Hostile sentiments towards migration in Denmark, the UK, France, Hungary and elsewhere will increase as the pressure grows. The attacks on refugee accommodation in Germany are bad, but in this context not really a surprise.

The endangered fortress could react inwardly with conflicts among member states, signs of which have already been seen. Denmark tried years ago to control its border with Germany more visibly. France also temporarily closed its border with Italy on the Riviera.

The UK has also accused France of not sufficiently protecting access to the Eurotunnel in Calais. Similarly, Italy has publicly accused eastern European EU member states of showing a lack of solidarity, due to the relatively few number of immigrants being accepted there.

When the pressure increases in the future, it may well be that the states have second thoughts on their sovereignty at the borders and want to protect their own little fortress. The freedom to travel without identity checks in the countries of the so-called "Schengen Area" could be in danger. Could the issue of migration, regardless of all the social problems, be a political bomb for the EU?

The EU has no real strategy toward the West Balkans, Professor Ulf Brunnbauer tells DW prior to the EU-Western Balkans conference in Vienna. (27.08.2015)

Police: Many migrants found dead in truck in Austria

Police in Austria have found a smuggler's truck in the south of Vienna with dead bodies of migrants. Police spoke of at least 20 casualties, but the numbers could go up. (27.08.2015)