Formula One: Hamilton cuts Verstappen's lead as title goes to the wire

A five-place grid penalty cost Max Verstappen the chance to win in Qatar but the Dutchman limited the damage. Lewis Hamilton led his rival from the start and it's too close to call with two races remaning. 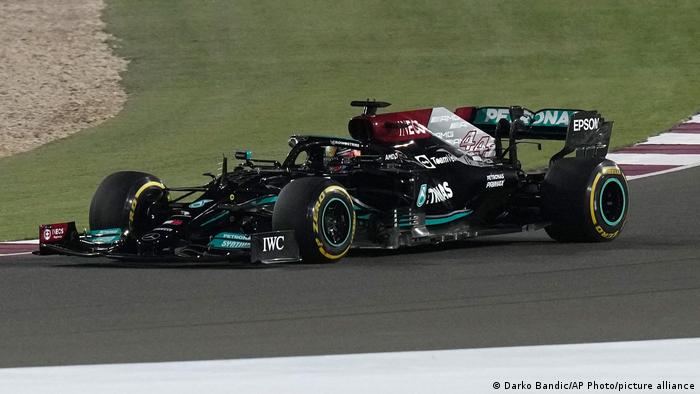 Lewis Hamilton has an eighth drivers' championship in his sights

In Brazil he had to produce a brilliant performance to win, but Sunday's victory was a much simpler affair for Lewis Hamilton, who led from the start to move to within eight points of leader Max Verstappen with two Grand Prixs remaining.

Shortly before the start, Verstappen was handed with a five-place grid penalty for failing to slow for double waved yellow flags in qualifying, meaning the Red Bull driver started in seventh. While a typically aggressive opening saw the Dutchman up in to second by lap five, he was never really in a position to challenge Hamilton.

"It was pretty straightforward," admitted Hamilton after the race. "It was pretty lonely at the front and it was a solid job from the team. I’m really grateful for these points, it’s been a hell of a year and back to back wins is amazing."

Hamilton also thanked the crowd, after the first race to take place in Qatar in front of fans. With Grand Prixs in Saudi Arabia and Abu Dhabi to come, every point counts and Verstappen's fastest lap point towards the end of the race could yet prove critical.

"At the end of the day, to get that fastest lap was very nice," Verstappen said. "It’s going to be very difficult to the end, but it keeps it exciting."

If the top two were predictable, the final podium spot was anything but. At 40-years-old Fernando Alonso might've thought that his previous top three finish, in Hungary in 2014, would be his last.

But the Spaniard used all his experience to hold off the late charge of Red Bull's Sergio Perez to claim his best result since returning to the sport. "It's unbelievable. Seven years and we've finally got it," he said afterwards. "I've been waiting so long for this and I'm so happy."