John Glenn, the first US astronaut to orbit Earth and a former Ohio senator, has died at 95. Hailed as "the ultimate hometown hero," he served as a senator for 24 years and later became the oldest man in space. 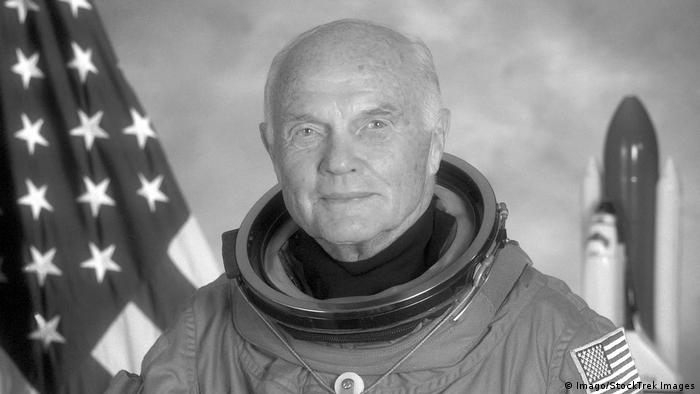 John Glenn, who made history as the first US American to orbit the Earth in and later as the oldest man to venture into space, has died in his home state of Ohio, the state's governor announced on Thursday.

"John Glenn is, and always will be, Ohio's ultimate hometown hero, and his passing today is an occasion for all of us to grieve," noted Ohio Governor John Kasich on Twitter.

The US space agency NASA called Glenn a "true American hero" and said they were "saddened" by his loss on Twitter.

"John always had the right stuff, inspiring generations of scientists, engineers and astronauts who will take us to Mars and beyond -- not just to visit, but to stay," Obama said in a statement.

"With John's passing, our nation has lost an icon and Michelle and I have lost a friend," the president said. "On behalf of a grateful nation, Godspeed, John Glenn."

The 95-year-old Glenn had been in declining health when he was admitted to an Ohio State University hospital last week. No cause of death was given but he recently suffered a stroke, according to news reports.

Born in Cambridge, Ohio on July 18, 1921 as the son of a railway guard, he studied mathematics in college and joined the Marines as an aviation cadet in 1942. He went on to fly numerous combat missions in both World War II and the Korean War.

He became famous in February 20, 1962 as the first American to orbit the earth flying for just under five hours as he orbited the planet three times. A fellow astronaut uttered "Godspeed, John Glenn" prior to liftoff, a phrase that became part of NASA lore.

"Zero-G (gravity) and I feel fine," Glenn said several minutes into his mission. "... Oh, and that view is tremendous."

Glenn was credited with reviving US pride in space exploration during the height of the Cold War and the space race with the Soviet Union.

Decades later, he returned to "the new frontier" at the age of 77 - setting another record by becoming the oldest person to venture into space. Teachers in Ohio paused class to watch Glenn's historic liftoff on October 29, 1998 along with millions of other TV-spectators. Glenn flew aboard the shuttle Discovery on a nine-day mission, withstanding the flight with no complications.

"Just because you're up in years some doesn't mean you don't have hopes and dreams and aspirations just as much as younger people do," he said following the mission. 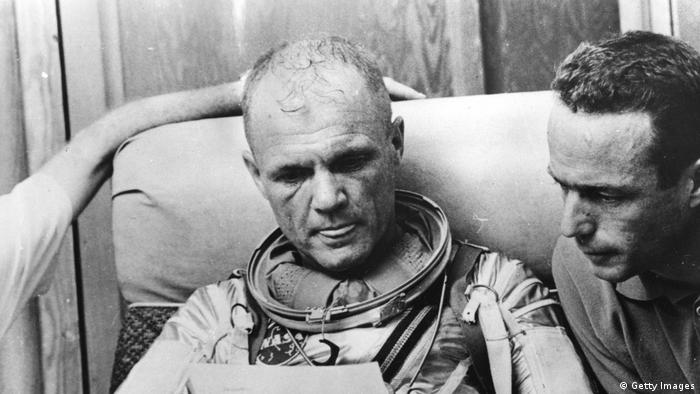 Glenn became the first American to orbit the earth in 1962

After his 23-year career in the US military and NASA space program, Glenn entered politics and was elected as a Democratic Ohio senator in 1974. He stayed in the post for another 24 years, garnering a reputation as a thoughtful moderate with expertise in defense and foreign policy.

"What made John Glenn a great senator was the same quality that made him a great astronaut and an iconic American hero: He saw enormous untapped potential in the nation he loved and he had faith that America could overcome any challenge," said current Ohio Senator Sherrod Brown following the news of Glenn's death.

His political career was slightly tarnished by a Senate investigation of five senators who were suspected of doing favors for campaign contributor Charles Keating Jr. A panel eventually found that Glenn did nothing improper or illegal.

In 2012, Obama awarded Glenn the country's highest civilian honor - the Presidential Medal of Freedom. Renowned in his home state as a hero, several buildings, schools, colleges and an airport in Ohio carry his name.

Glenn is survived by his wife of 73 years and childhood sweetheart, Annie Castor. The couple had two children, David and Lyn.

Buzz Aldrin, the second man to walk on the moon, has been medically evacuated from the South Pole. The legendary astronaut remains in stable condition after doctors found fluid in his lungs, reports say. (01.12.2016)

Ever taken the time to think about what astronauts do when they need to use the bathroom in space? Inventors worldwide are doing that right now, answering NASA's challenge to find a new portable waste management system. (24.11.2016)

A female astronaut for Germany?

Eleven Germans have so far voyaged into outer space, all of them men. Now Germany is looking for its first woman astronaut. 86 candidates are left on the list. We meet two: a fighter jet pilot and a surgeon. (18.11.2016)