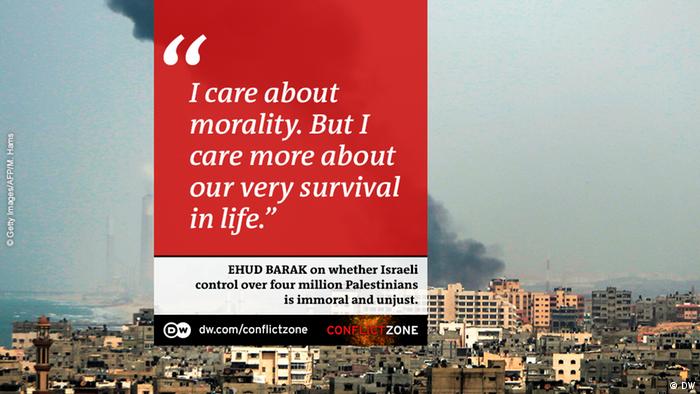 Israel might be on a "slippery slope toward apartheid," Ehud Barak warns in an exclusive interview with Tim Sebastian on DW’s Conflict Zone.

"If we keep controlling the whole area from the Mediterranean to river Jordan where some 13 million people are living, eight million Israelis, five million Palestinians, it would become inevitably - that's the key word: inevitably - either non-Jewish or non-democratic. We want neither a bi-national state with a civil war nor apartheid," the former Israeli Prime Minister told Tim Sebastian.

However, he remains unapologetic: "I care about morality. But I care more about our very survival in life," he said discussing the ongoing Israeli occupation of the West Bank, inhabited by four million Palestinians.

Why is the peace process such a failure?

Half a century after the occupation of the West Bank and East Jerusalem, the peace process and attempts towards building two-state solution, which both sides are still officially in favor of, appears to have failed.

The reason, according to many including the UN security council, is the Jewish Settlements in the West Bank which were deemed unlawful by the council. “It will become legal if and when the two sides reach an agreement upon which a mutually agreed line will be delineated within which we live a solely Jewish majority for generations to come. And the Palestinians have enough place for full vibrant and viable Palestinian de-militarized state,” Barak claims.

In the previous part of Conflict Zone's special series marking 50 years of occupation, Nabeel Shaath, an advisor to the Palestinian president displayed a completely different view: "The problem is settler occupation of this land and the decision by the Israeli government never to give back, never to go into a two-state solution, never to allow us to regain half of Jerusalem, never to give us the freedom and the choice to be a really free and democratic country. We are a country under full occupation and full colonial grabbing of water and land."

Punitive punishment doctrine and disproportional use of power

But the peace process hasn't only failed; the conflict also caused many Palestinian civilian casualties.

Tim Sebastian asked Barak on his policies as defense minister during Operation Cast Lead (2008.2009), also known as Gaza War, where 1,400 Gazans were killed including 300 children, according to Amnesty International. There were 13 Israeli casualties including four who died from friendly fire.

The World Health Organization (WHO) reported that 14 percent of buildings in Gaza were partially or completely destroyed during the war, as well as 700 factories and businesses, 16 hospitals, 38 primary health care centers, 280 schools and 250 wells.

"It never was aimed at the civilian population," Barak said. I'm not happy with any human life lost." He added it was impossible to avoid collateral damage even with the most accurate weapons: "I am not happy, I am very sorry for it, but I cannot tell you that I will not repeat it if the life and security of our own people is at stake.”

The former Prime Minister (1999-2001) and Defense Minister (2009 to 2013) also told DW he tried to see the Palestinian point of view "better than any other Israeli leader” and emphasized Israel needed to find a way to "disengage from the Palestinians".

Fifty years on and Israeli occupation continues. Peace is stalled. Elections delayed. Why, after so long, have the Palestinians achieved so little? Tim Sebastian meets Nabeel Shaath, adviser to the Palestinian president. (14.06.2017)

Yair Lapid: 'Israel will protect its interests no matter what'

As the world marks 50 years of Israeli occupation in Palestine, Conflict Zone speaks with Yair Lapid in Tel Aviv, a former finance minister who is tipped as a future prime minister. What is his vision for peace? (08.06.2017)

My picture of the week | Six-Day War: How long will it last?