A former editor of a now defunct British tabloid has been found guilty of phone hacking. The trial was triggered by revelations that the paper had for years been hacking phones for news stories. 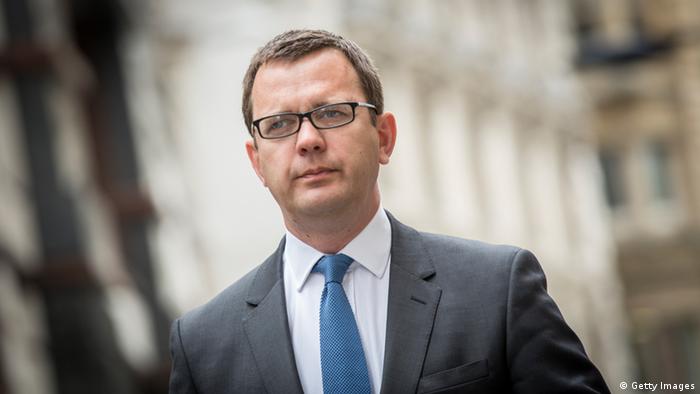 A London court on Tuesday found Andy Coulson (pictured above) guilty of conspiring to intercept communications while he was editor of the British tabloid News of the World. In addition to being a former News of the World editor, Coulson is also a former press secretary to British Prime Minister David Cameron.

However, after eight days of deliberations, the jury at the Old Bailey court found Rebekah Brooks, Coulson's predecessor as editor not guilty of all of the charges against her, including conspiring to hack into communications and several counts of bribing officials and obstructing police. After she was editor, Brooks moved on to become chief executive of News International.

Former News of the World managing editor Stuart Kuttner was found not guilty of phone hacking.

News of the World closed

The owners of News International, Rupert Murdoch's News Corp., shut down the tabloid in July 2011 after 168 years of publication, amid public outrage sparked by the news that its journalists had hacked into the voicemails of the mobile phone of a murdered schoolgirl.

It was subsequently revealed that the paper had been illegally eavesdropping on the voicemails of celebrities, politicians and other victims of crime for years.

The jury, which has been deliberating for eight days, is still considering two further charges of paying officials for royal phone directories.

"We said long ago, and repeat today, that wrongdoing occurred, and we apologized for it," the spokesman said. "We have been paying compensation to those affected and have cooperated with investigations."

The long-awaited trial of defendants implicated in the phone-hacking scandal that spelled the end for British tabloid News of the World has begun in London. The court case could run for half a year. (28.10.2013)

'A perfect storm?' Can the BBC and UK journalism survive?

Will the crisis currently engulfing the BBC be the last nail in the coffin of an already weakened British media? DW assesses whether press freedom can survive and public confidence be restored. (15.11.2012)

A far-reaching inquiry into British newspapers has called for a new independent body, backed by law, to regulate the press. The inquiry was triggered by Rupert Murdoch's News of the World tabloid phone hacking scandal. (29.11.2012)