Still full of Nazi symbols, Vogelsang Castle is reopening with a new exhibition that reveals how Nazi ideology convinced so many people. With the right-wing growing in Germany, it serves as a warning.

Germany has just completed the last redevelopment of a major Nazi-era site with the opening of a state-of-the-art exhibition at Vogelsang Castle, a college built in the 1930s to forge a new aristocracy of Third Reich leaders.

It straddles a slope overlooking a spectacular vista of lakes and wooded hills in the western Eifel region and was off-limits for 60 years because it was used as a military base and training camp for NATO troops.

Vogelsang, which means "bird song," was opened to the public in 2006 after the Belgian army vacated it, confronting authorities with a dilemma because the place is festooned with Nazi symbols and statues. They include a huge swastika covering the floor of a former "cult chamber," a five-meter (over 16-foot) high Germanic torchbearer, a mural of muscle-bound Aryan athletes in the swimming pool and bas-reliefs of Teutonic knights adorning two entrance towers.

With the wartime generations dying out and right-wing populism on the rise in Europe and the US, sites like Vogelsang are as important as ever because they show where nationalism and racism can lead, say historians. "Visitors are confronted with the question, 'What has this got to do with me?' If you look at political developments today, it's very relevant," Gabriele Harzheim, a researcher at Vogelsang, told DW.

Vogelsang once a Nazi school

The new exhibition opening on Sunday is part of a four-and-a-half year, 45-million-euro ($50-million) project to secure the crumbling buildings. A museum on local wildlife is also being opened at the site.

Vogelsang was one of three colleges devised to alleviate a dire shortage of qualified staff for administrative jobs and top party positions after membership soared following Hitler's rise to power in 1933. But the curriculum consisted predominantly of physical exercise to hone the students into the athletic ideal depicted by the sculptures around them.

Most of the 2,000 male students schooled there and at another college in Krössinsee in what is now Poland came from lower-middle-class backgrounds and had suffered unemployment in the recession that preceded Hitler's rise. They were lured with the promise of rapid advancement up the party ranks and lucrative positions if they joined the four-year program.

Academic qualifications weren't necessary. The students were in their 20s and 30s. Married applicants were preferred. Robert Ley, the Nazi official who set up the colleges, believed that a man who wasn't married by 25 was too indecisive to be a leader. Unmarried men were encouraged to wed, and some did so in sumptuous ceremonies at Vogelsang. 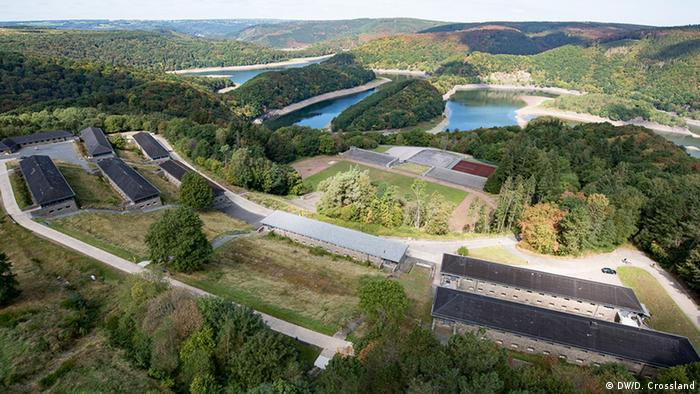 "The main thing Vogelsang did was make the students feel like an elite," said Frank Engehausen of Heidelberg University, a historian who helped design the new exhibition. "They had special uniforms, they got waited on, and when they went on trips around Germany, they were presented as the future political leaders."

The men heard lectures about the supremacy of the German race and the need to rid themselves of compassion and show blind obedience to the Nazi ideal.

The exhibition effectively conveys how those attitudes led to genocide, the euthanasia program and the invasion of Eastern Europe and Russia. It contains striking photographs of ordinary-looking men smiling in their uniforms, at work and play, and includes interactive displays with testimonies from Holocaust victims.

The communal halls at Vogelsang were feudal and elaborately decorated while the squat, barrack-like dormitories were spartan to emphasize the community over the individual. Nazism was elevated to a religion in torch-lit ceremonies in the cult chamber which featured a statue of the "new German man" flanked on the walls by the names of "martyrs" killed in the failed Beer Hall Putsch in Munich in 1923. That statue has disappeared but the brick swastika in the floor remains - it will be kept covered up.

With the outbreak of World War II, most of the students joined the army as ordinary soldiers, as many as 70 percent of which were killed. Some were assigned to the brutal civil administration in occupied parts of the Soviet Union, where they were involved in the selection of Jews for forced labor and rooting out resistance.

One former student, Franz Murer, who studied at Krössinsee, was responsible for the killing of thousands of Jews in Lithuania and became known as the "Butcher of Vilnius."

When Vogelsang became accessible to the public in 2006, some people called for it to be razed, and there has been criticism of the large sums invested in preserving it.

"If you close these places or allow them to decay you lose an evidence base and a narrative," said John Lennon, director of the Moffat Centre for Travel and Tourism Business Development at Glasgow Caledonian University.

Albert Moritz, director of the public company that oversaw the development, said the site offered huge potential for teaching new generations. "It complements the concentration camp memorials because it helps to explain how Nazism came about. Schools in the region visit Auschwitz and then come here."

However, the Central Council of Jews in Germany said authorities should give priority to funding the upkeep of victims' sites like the concentration camps.

The Council's president, Josef Schuster, told DW that Germany had a primary obligation to preserve monuments to the victims, both in Germany and Poland, since "these sights create empathy with the victims that the next generations should also develop." He added, "Only when that is assured is it justified in our view to invest millions in the sites of the perpetrators."

But Vogelsang is the latest in a series of major investments at former Nazi sites in the last two decades in response to growing visitor numbers and a new-found desire to preserve the locations for future generations.

For decades after the war, the principal focus was on preserving the concentration camps to atone for the Holocaust. For many years, Nazi sites were either off-limits because they were kept in use as military locations by Allied or German forces, or allowed to crumble quietly as awkward reminders of a history the nation preferred to forget.

With the end of the Cold War, US forces abandoned Obersalzberg, the site of Hitler's Berghof mountain retreat, while Belgian troops left Vogelsang and Russian and East German troops pulled out of historic locations across the former communist East such as Prora, built as a vast vacation camp on the Baltic island of Rügen.

The sudden access, combined with a growing curiosity by young Germans about why their grandparents followed Hitler, and the need to prevent the sites from attracting neo-Nazi pilgrims, forced regional authorities to act.

"The eyewitnesses are dying out and with ever fewer people around to explain what happened, the stone testimony is becoming more important," said Axel Drecoll, head of the Obersalzberg exhibition. 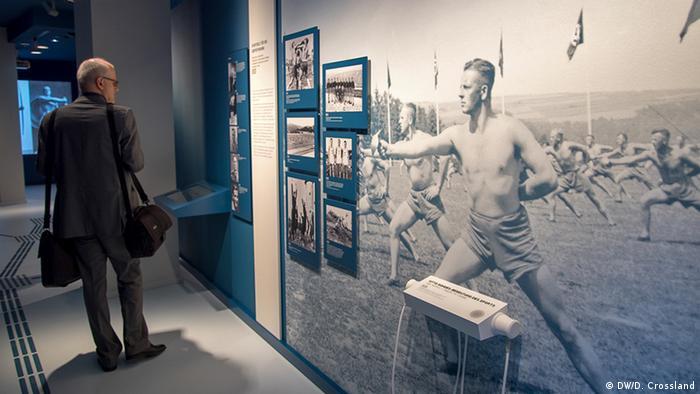 The Bavarian government is investing 17 million euros into more than doubling the exhibition space at the Obersalzberg documentation center because visitor numbers are five times higher than the 30,000 per year the organizers had anticipated when it opened in 1999. Last year, 171,727 visitors were registered, including 543 school classes - up from 339 the year before.

In central Berlin, the Topography of Terror museum opened in 2010 at the site of the razed headquarters of the Secret State Police, the SS and the Reich Security Main Office, the central institutions of Nazi persecution, is one of the city's most visited sites, attracting over one million people a year.

In Nuremberg, the buildings of the vast Nazi party rallying grounds including the grandstand from where Hitler addressed more than half a million people are now so dilapidated that the city plans to repair them in a project estimated to cost up to 75 million.

"This isn't about a restoration or even a reconstruction, but about long-term preservation of the status quo which will also give coming generations the possibility for a confrontation [with history]," said Nuremberg mayor Ulrich Maly.

'No neo-Nazi will feel comfortable at Vogelsang'

With the reopening of former Nazi sites, museum directors and tourism officials are well aware of the risk that they're pandering to "dark tourism" - motivated by fascination with the macabre grandeur of the Nazi regime.

"We are fascinated by the evil man is able to do to other men," said Lennon. "But the sites are well explained; the motivation of visitors is a whole different issue and you cannot put that at the feet of the German authorities or museologists. The German approach to this documentation and openness has been among the leading approaches in the world."

Engehausen said he was "quite confident that no neo-Nazi will feel comfortable in the Vogelsang exhibition." That said, neo-Nazis do visit the place. In the past they have unfurled banners and taken photos of themselves near the gigantic statue of the torch bearer.

On Obersalzberg mountain, curators plan to incorporate the remaining foundations of Hitler's Berghof villa in their soon-to-expanded exhibition. The trees that have grown over it are being left untouched, obscuring the famous Alpine panorama Hitler had from his 15-meter window. The aim is to convey the transience of his rule. "We're deliberately trying to break the fascination the place exudes," said Drecoll.

Every year still, especially after Hitler's birthday on April 20, burnt candles are found at the site.

It's been called too republican and was misused by the Nazis. The German national anthem, sung to a melody by Haydn, was written 175 years ago. "Unity, justice and freedom" seem to be resilient to political upheaval. (26.08.2016)

According to legend, the Nazis packed a train with gold at the end of World War II. It has never been found. A German-Polish excavation team is convinced it will find it. But for local residents, the legend is enough. (23.08.2016)

The Olympic village built by the Nazis for the 1936 Games has been quietly crumbling for decades in woodland west of Berlin. But now local authorities are planning to revitalize the historic site. (19.08.2016)