Joachim Löw has received mixed reviews after he presented his analysis as to why Germany crashed out of the World Cup at the group stage. A number of former German stars have expressed cautious support for the coach. 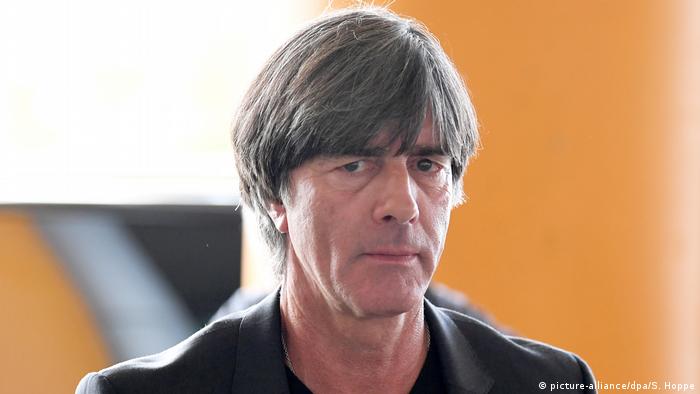 Few, if any German media outlets were particularly impressed by the analysis of what went wrong for Germany at the 2018 World Cup in Russia presented by national team head coach Joachim Löw in Munich on Wednesday.

Read more: Opinion: Too little, too late and still too detached

The mass circulation newspaper Bild described the self-criticism that Löw expressed at the press conference as "weak," the national broadsheet Die Welt wrote that the Germany coach "lacked the strength to act," while the news magazine Spiegel found that the results of the German Football Association's (DFB) analysis was "not worthy of two months of silence."

German football fans will be watching Löw like a hawk when the national team faces World Cup champions France in their first match in the inaugural UEFA Nations League next Thursday, before taking on Peru in an international friendly the following Sunday.

Among them will be many former World Cup winners, some of whom have expressed cautious support for the national team coach following Wednesday's presentation.

Guido Buchwald, a defender who won the World Cup with West Germany in 1990, praised Löw for admitting that he had made mistakes that contributed to the national team being eliminated at the group stage in Russia.

"Now people should just trust him," Buchwald said. "The games against France and Peru will quickly show whether the players learned from the World Cup disgrace."

Rainer Bonhof, a member of the 1974 World Cup-winning side, also praised Löw for his self-criticism, saying it was "absolutely necessary for a rebuild." He added that by calling up Leroy Sané for the upcoming international break, Löw had acknowleged that he had "made a mistake" by not taking the Manchester City forward to Russia.

Thomas Hässler, a midfielder on the 1990 side, praised Löw for giving Kai Havertz, Thilo Kehrer and Nico Schulz their first national team call-ups, saying it was "right to inject fresh blood into the team."

However, another, Olaf Thon, criticized the fact that it had taken two months for Löw and his team to draw their conclusions from Germany's failure in Russia.

"After the World Cup, things were stretched out like chewing gum," the former Schalke and Bayern star said. "The national team coach now has the chance to prove whether we will see a different national team against a very strong opponent and World Cup champion."

Stefan Freund, a member of the German team that won Euro 96 said that while he too welcomed the injection of fresh blood into the national team, "the structural problems have not been addressed."

He also said that the analysis presented by Löw and Oliver Bierhoff, the national team general manager, was "exactly what was to be expected."

After Germany's World Cup disaster: Where does the DFB go from here?

The German Football Association is facing one of the most decisive periods of its history. Questions about structure, leadership, and development are bound to be at the center of the DFB's focus for some time to come. (22.08.2018)

Ilkay Gündogan has said he intends to continue to play for the national team despite the racism that he experienced after meeting with the Turkish president. He also said that Joachim Löw is the right coach for Germany. (28.08.2018)