After Germany's World Cup disaster: Where does the DFB go from here?

The German Football Association is facing one of the most decisive periods of its history. Questions about structure, leadership, and development are bound to be at the center of the DFB's focus for some time to come.

This summer has been busy in a very different way to what the German Football Association (DFB) had expected just a few weeks ago. The two months since Germany's shock World Cup exit in the group stage have been filled with power struggles, racist abuse of one now former national team member, and a national discourse on integration. With head coach Joachim Löw set to formally  present his analysis of what went wrong at the World Cup on August 29, it's crystal clear that German football has a whole lot of broken parts that need fixing.

On Tuesday, the German FA met with Löw and national team manager Oliver Bierhoff, as well as representatives of the German Football League (DFL), which operates the Bundesliga. Bayern Munich CEO Karl-Heinz Rummenigge, DFL President Reinhard Rauball and Schalke's board member responsible for sport, Christian Heidel, were just some of those in attendance.

The meeting lasted three hours and everyone in attendence who spoke to reporters afterwards said they still trusted Löw. It was also clear, German FA President Reinhard Grindel said, that both the DFB and the Bundesliga were working together. There was also talk of reviewing the coaching in the country, with the hope that of giving players a better chance to develop their talent as individuals rather than their football being strictly system-based. One look at how Bundesliga teams fared in Europe last season and the disappointing performances of some of Germany's youth teams and it's clear to see why concern has grown.

The hope is that the German FA will follow up their use of the right words with the right actions. After all, this is the season in which the DFB will need to do a great deal of work to not only to repair the damage caused by Russia and the aftermath, but also to secure the future of German football. 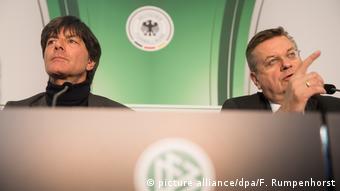 One major concern in this regard is the fallout to Mesut Özil's decision to step away from the team.German football will have to deal with the growing issue of how future generations of migrants feel about playing for Germany. In a wider context, German football will also have examine how to manage its contribution to a nationwide debate about immigration and cultural integration, which was rekindled by Özil's and Ilkay Gündogan's photo with Turkish President Recep Tayyip Erdogan ahead of the World Cup.

The performance in Russia also poses questions of Joachim Löw. His squad selection and tactical decisions were widely criticized, and he agreed to stay in charge almost instantly after the team returned to Germany. His explanation for the World Cup exit is hugely anticipated, and will set the tone for how and if he can take this team forward towards Euro 2020.

The German FA will move forward under Grindel's stewardship, despite a summer exemplary of how not to handle a crisis. Among other things, Grindel has been criticized as being more of a politician than a football person. He has since apologized over not defending Özil in the face of racial abuse.

There are also concerns over team manager Bierhoff. While he has undoubtedly contributed to the success of German football over the past 14 years, he's been criticized over a perceived increased focus on marketing and sponsorship involving the national team, as well as increased ticket prices for their games.

German football has a bumpy path to travel if it is to return to the summit of the sport. Former DFB sporting director Matthias Sammer has called for major changes, which will have to start with putting out the fires that threaten to rage into 2019.