After years on the run, a former member of the left-wing extremist women’s group "Rote Zora" turned herself in late last year. Starting Wednesday, she is being tried for her involvement in two botched terrorist attacks. 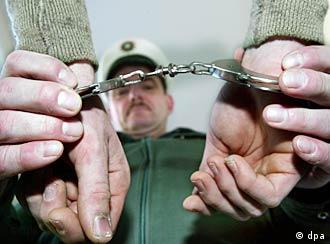 Europe is still confronted with the issue of left-wing extremism

A suspected member of a German left-wing extremist group admitted in court Wednesday to two failed bomb attacks in the 1980s as her trial began in Berlin.

The 58-year-old defendant, Adrienne Gerhäuser, presented a statement saying that she had "knowingly and willingly" attempted to bomb the Berlin Genetic Technical Institute in 1986 and a clothing factory in Bavaria in 1987 on behalf of the far-left organization Rote Zora.

She said the attacks were motivated by her political beliefs at the time, including a fierce opposition to genetic engineering and solidarity with striking female factory workers in South Korea.

Gerhäuser said she had provided alarm clocks for two detonators. But in both cases the devices failed to go off and no one was injured.

She stands accused of belonging to a terrorist organization and attempting bombing.

The Berlin court said that because Gerhäuser had turned herself in to the authorities late last year, the maximum penalty she would face would be two-year suspended sentence.

Rote Zora was a women's splinter group that claimed responsibility for 45 bombings and cases of arson between April 1977 and February 1988 with the aim of bringing about radical change in German society.

The group was part of the so-called Revolutionary Cells network until 1986.

Debate about a wave of attacks unleashed by the far-left in Germany in the 1970s and 1980s resurfaced in recent months as two former guerrillas from the Red Army Faction sought release from prison.

Brigitte Mohnhaupt, who was convicted for her role in nine murders in the left-wing group's campaign against the West German state in the 1970s, left jail last month after 24 years in detention.

A German court granted the 57-year-old's release because she served her minimum sentence and was no longer considered a threat. But a court in February refused prison day releases for

Christian Klar, 54, who led the RAF along with Mohnhaupt.

The families of the victims of the RAF, also known as the Baader-Meinhof Gang, have bitterly opposed any clemency, partly because Mohnhaupt and Klar never expressed remorse for the murders.

A new, far-left German political party, called simply The Left, was recently made official. Some say it could seriously damage the country's ruling center-left Social Democrats. (29.03.2007)