It worked in China, so why not in Germany? Former German national team captain Oliver Kahn wants to bring his successful reality show from Asia to the small screen at home. The show aims to find new goalkeeping talent. 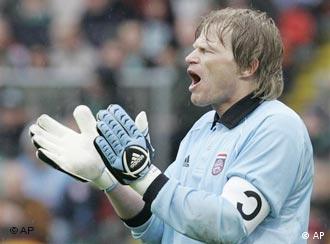 Big in China. Will Kahn's show make it in Germany, too?

The former Germany captain and goalie, who led the country to the 2002 World Cup final against Brazil, told the daily tabloid Bild that he was working on a deal to launch his show, "Never give up - The Kahn Principle" for a German audience.

The show puts aspiring goalkeepers through a series of challenges.

The winner, Kahn said, would be awarded a contract to play for a Bundesliga team. He added that he was in negotiations with television channel Sat 1.

Although Kahn received his coaching license last year, he said he plans to stick to television for the time being.

"Right now for me there is no reason to go back into football," the 42-year-old told Bild.

Kahn said there were plans for eight episodes of the show's German version to be broadcast starting in May 2012.

Hamburg conceded a whopping five goals against Bayern Munich in Saturday's Bundesliga clash, losing 5-0 to favorites Bayern. Last season's champions Dortmund somewhat got their groove back with a 2-0 win over Nuremberg. (20.08.2011)

Young goalkeepers are becoming all the rage in German football

Conventional wisdom says you need experience between the posts, but many Bundesliga teams will start next season with goalkeepers barely old enough to drive. And that's not a bad idea. (03.08.2011)

Germany's ultra fan scene has stoked controversy this season through organized protests, anti-commercialization campaigns, and even violence. Are they a plague, or do they represent fans' interests? (24.05.2011)