The Bavarians were condemned to relegation after a 3-1 aggregate defeat to Jahn Regensburg in the relegation/promotion playoff. The Bavarians will compete in third-tier football for the first time since 1992-93. 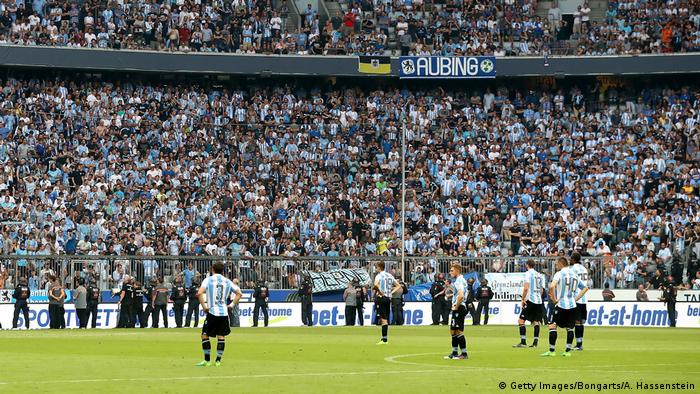 The short-term future of one of Germany's storied football clubs appears bleak. Former Bundesliga champions 1860 Munich were sent to the third division, after losing 2-0 in the second leg to Jahn Regensburg, who triumphed 3-1 on aggregate in the playoff between the third-worst second division club and the third best of the third tier.

Relegation to the third division marks the nadir for the Lions, who have endured a torrid few seasons in the second division. The Bavarians were in the playoffs two years ago, scoring in stoppage time against Holstein Kiel to avoid the drop. Last season, the pattern was similar, but the Bavarians finishing two points clear of the playoff position.

One of the founding members of the Bundesliga in 1963, 1860 Munich have been in turmoil since 2011 when investor Hasan Ismaik purchased 60 per cent of the shares in the club. Though the Jordanian has the lion's share of control, he still only has 49 per cent of the voting rights, so the club abides with the 50+1 regulation.

1860 Munich's problems have been apparent for long enough, with Ismaik targeting the media and making a number of bad decisions on the sporting front.

Two sporting directors with Bundesliga experience have been ditched in the past year, while there have been five different coaches since the start of 2016. The current coach, Vitor Pereira, could well leave the club in the face of relegation, despite his contract running until 2018.

After Tuesday's match, the club announced that chief executive Ian Ayre, formerly of Liverpool, who had only taken up the position in April, had tendered his resignation before the game. Club president Peter Cassalette resigned after the match.

Beyond this, there will be serious ramifications for the Bavarian club, both in a sporting and economic context. In the third division, 1860 will collect just one million euros ($1.11 million) in television revenue, compared to the six million in the second tier.

A place in the German Cup is not guaranteed as long as the club remains below the top-two divisions.

Where the club decides to play its football next season remains another point of contention. Although the current lease at the Allianz Arena runs until 2025, 1860 are expected to look for another - and more economically viable - home, possibly the municipally owned Grünwalder Stadion, which the club currently uses for reserve and youth-team matches.

Given the instability off the field, the a prospects for a return to the second division for the Bundesliga champions of 1966 seem rather bleak.