For pro-Israel Americans, Trump′s support may be less than welcome | Americas| North and South American news impacting on Europe | DW | 22.04.2017

For pro-Israel Americans, Trump's support may be less than welcome

Where being both pro-Israel and pro-Trump were already unfashionable, left-wing Jewish university students find themselves in a bind: Can they separate their message of opposing Trump and supporting the Jewish state? 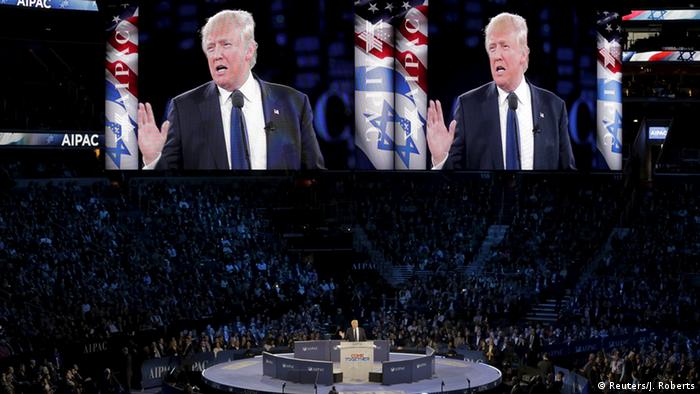 It's never comfortable to discover you're a fringe voice within your own community. But that's what several members of J Street U, the university branch of the pro-two-state organization J Street, discovered when they attended an anti-Boycott, Divest and Sanction (commonly known as BDS) at the United Nations in New York.

"We were told we were anti-Semitic, and we should go be beheaded in Gaza, and we should be sold as sex slaves," said Dylan Mittag, a freshman at Princeton University and the president of Princeton's J Street chapter. "I was at the conference because we wanted to fight BDS, and then we were called these terrible things by fellow Jews and fellow Israel supporters."

Since the Electoral College victory of Donald Trump, many voices around the United States that were once considered fringe have been empowered, pushing what once were considered mainstream or centrist causes out of the picture. This is no exception on college campuses, where being both anti-Israel and anti-Trump are fashionable stances to have and put pro-Israel students in an uncomfortable spot, especially considering that 75 percent of American Jews voted for Hillary Clinton.

Anti-Israel and pro-Palestinian voices have all but locked down the American college market, much to the deep concern of many in the Jewish and the pro-Israel community, who feel the current rhetoric encourages blatant anti-Semitism, not just anti-Israel action.

"I think that everyone in the pro-Israel community has been worried by the politicization of Israel, which until recently was broadcasted mightily as a bipartisan issue," said Jonathan Sarna, the Joseph H. & Belle R. Braun Professor of American Jewish History at Brandeis University. He added that larger groups, even AIPAC - the largest pro-Israel political action committee in the US, considered by many to be swinging further to the right - are making an effort to restore the bipartisan flavor to the Israel issue.

"Yes there is fear that people will say 'I hate Trump, Trump loves Israel, therefore I hate Israel.' No question about it, there is that danger," Sarna said. Supporters of Israel are now trying very hard to make it clear that being pro-Israel does not mean being pro-Trump.

But this is harder to sell to the current college generation."Aspects of Israel's history have not been understood by a younger generation," said Sarna. For young people these days, Israel is a first-world country and always has been, Sarna told DW. This makes it easier to disparage.

"Students on campuses are not aware of the facts. The Trump issue is a drop in the bucket in an already hostile environment toward Jews," said Mort Klein, the president of the right-wing Zionist Organization of America. "The propaganda that the SPJ [Students for Justice in Palestine] and J Street promote makes it difficult."

Separating the Trump factor from Israel is exactly the challenge for students involved in the more left-wing pro-Israel activism like J Street. J Street bills itself as pro-Israel and pro-Palestinian and is one of the last organizations left still promoting the two-state solution as a viable diplomatic option. 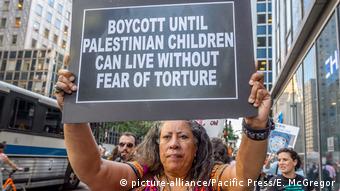 The BDS movement has gained traction on some US college campuses

But Trump's election has shrunk the middle ground that J Street has been trying to carve out for years, according Brooke Davies, a senior at University of North Carolina at Chapel Hill and the chair of J Street's National Student Board. It also gave anti-Israel activists a handy brush with which to paint pro-Israel students.

"Being pro-Israel is conflated with pro-Trump, and making our argument has gotten more complicated," said Davies. Avoiding this conflation has now become a focus of J Street U's work on campus.

"The specter of Trump is a major question that has to be dealt with," said Rikki Baker Keusch, an Israeli-American and a senior at University of Chicago, who serves as vice president of J Street U for the Midwest region. "It's made it more important for the American Jewish community more broadly to assert its own space in a way that didn't feel as urgent before."

Davies and Baker Keusch said that not much has changed in terms of the players on the scene. "The people who are going to write you off as anti-human rights are the same people who would have done that before the election," said Baker Keusch. Except that now, these people feel enfranchised to do so in a louder way. As Davies put it, "trends are amplified," meaning that certain voices on the far left and far right that may previously have been rare to hear now have a bigger platform.

For example, the anti-BDS conference, where Mittag said many fringe voices found a home. "These were some of the most right-wing statements I ever heard in my life," Mittag said. "Because of Trump these people feel empowered, and it's changed what it means to be pro-Israel in a sense. If you're pro-Israel, it means you can't criticize it anymore."